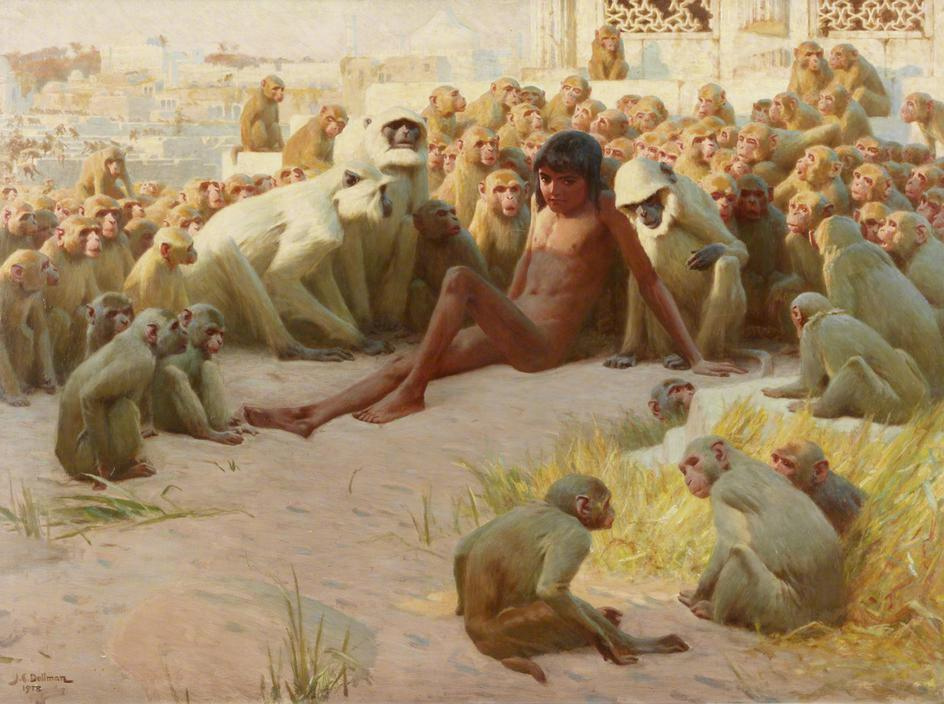 Something for Summer Reading: ‘The Jungle Book’ by Rudyard Kipling

Are you looking for a fine and fun summertime read to rekindle the sunny days of your youth? Or perhaps to read to your children in the late-summer evenings? There may be no better book for you and your little ones than “The Jungle Book” for its whimsy and its wisdom.

Rudyard Kipling’s celebrated collection of stories called “The Jungle Book” is a spirited, playful safari with moments of profound gravity that both evoke and enshrine what it means to be human in a wilderness of creatures—that is, to have ascendency and stewardship.

The collection of curious and compelling tales of the animal kingdom and the king of the animals seeks to point to the place where creatures great and small belong in the wide and wild world.

A World of Tigers, Seals, Elephants … and Men

Mowgli is the man cub raised by wolves in the jungles of India, who grows to learn his place first in the pack, then in the human village, and finally in overcoming the dreadful tiger Shere Khan.

While Mowgli’s episodes are the most famous, it is a shame to abandon to obscurity Kotick the White Seal, who saves his kind from hunters in the Bering Sea; or Rikki-Tikki-Tavi the mongoose, who protects an English family from a pair of cobras; or Toomai of the Elephants, a young elephant handler who, by his kindness, comes to discover the mysterious dance of those lumbering beasts.

“The Jungle Book” teems with creatures that have purpose and pleasure in distant environs. It is more of a jungle than a book, and its joy is the joy of the wild things together with the noble and fearful sovereignty of man, the wildest thing of all. For, as Mowgli shows, it is his gaze that the animals cannot bear to meet.

A Dated Yet Eternal Perspective

One thing to be cautious of in “The Jungle Book:” Kipling is often criticized for his emphasis on what he would call patriotism—and we might call imperialism—and the caste systems that influence his tales. But they are not overbearing.

The English presence in India, Africa, and Afghanistan, whether in family units as in “Rikki-Tikki-Tavi” or in military units as in the final chapter, “Her Majesty’s Servants,” is not presented as a racial or ideological invasion, but rather as a simple and accepted matter of business.

The situations bear a practical rather than a demeaning air, offering a hierarchical charm that organizes the animal kingdom with something more like cooperation than competition—like a food chain. From the animals that prowl through the steaming forests to the animals that parade in a British military camp, the great secret of the jungle is that there is a jungle law “which never orders anything without a reason.”

A Book for Young and Old

“The Jungle Book” is a delight for readers young and old because it revels in energy that the young can relate to and the old can recall. Mowgli’s adventures are thrilling for children and recall the rites of passage to maturity.

Kotick is a playful seal who must take on a dangerous mission to save his family. Rikki-Tikki-Tavi engages an ancient instinct against his snake-like foes to preserve new life in the nursery. Mowgli must use the knowledge that he learned in his feral youth to become a responsible man and to deliver the human community from the menacing tiger.

As for style, Kipling’s tales are narrated with a formality that amuses readers with its antiquated yet lively tone. Kipling’s skill as a storyteller renders “The Jungle Book” a graceful tour de force, blazing a trail through a menagerie that has more life and vigor at every turn than anything that can be seen in a dull tour of a zoo.

It’s a Jungle in There

The lure and love of animals is part of humanity, rooted in the ancient jungles of our heredity, and echoing through ages past when man walked naked and fearless with the beasts. The childlike fascination with the animal kingdom might be a remnant of the time when man was in his infancy and walked in the Garden of Eden as king of all the animals. Much of this lost inheritance—this lost innocence—is conjured and cherished in literature that reconnects man to the animals through imaginative, anthropomorphic adventures.

“The Jungle Book” is a leader of that pack of books that reunite mankind with animal-kind, allowing readers to recall the thrilling wildness that pulses with summer heat and the unbridled romance of the untamed.

Take a tour of the jungle in these waning summer weeks and find out for yourself that there is a simplicity in Kipling that can help navigate the jungle of our day-to-day lives.