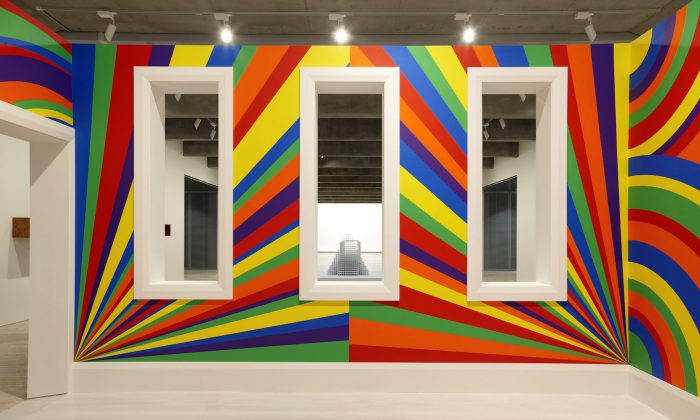 SYDNEY – Conceptual artist Sol LeWitt (1928-2007) was influential in many of America’s modern art movements. When he embraced the work of indigenous artist Emily Kame Kngwarreye, it took art collector and patron John Kaldor by surprise.

Ms Kngwarreye, a central desert artist, was prominent in her own right, but the two artists were worlds apart, Mr Kaldor said.

“It was very interesting because Sol was very much a New Yorker, from Manhattan, and Emily Kngwarreye was from the middle of Australia.”

Speaking to Epoch Times at a preview of the Art Gallery of New South Wales’ current exhibition, “Sol LeWitt: Your mind is exactly at that line”, Mr Kaldor described LeWitt as “one of the most important artists of the second half of the 20th century”.

The American artist had been equally surprised at Ms Kngwarreye’s work, he recalled.

“What surprised him was that somebody coming from a totally different direction produced something which had the same visual effect or impact that he did,” Mr Kaldor said. “He was intrigued by that.”

As director of Kaldor Public Arts Projects, Mr Kaldor had been commissioning works and collecting art since the late 1950s, including those of Mr LeWitt. It was in 1998 when Mr Kaldor brought the artist to Australia to exhibit at Sydney’s Museum of Contemporary Art that Mr LeWitt encountered an exhibition of Ms Kngwarreye’s work.

From that event, a relationship began. “Before he [LeWitt] got interested in indigenous work I really knew nothing about it,” Mr Kaldor conceded. “In a way, for most of us, it was the start of a journey.”

During the following years Mr Kaldor sent Mr LeWitt over 30 indigenous works, with LeWitt sending his own works in return.

Sol LeWitt grew up in Connecticut, experimenting with graphics, architectural design, cartoons and illustration before deciding to strip art back to the essentials – primary colours, the line, the square, the triangle. He became involved with various modern art movements including Minimalism and Conceptual art. The idea of a work became all important, and the simpler and more uncluttered the execution, the better.

“Conceptual art is not necessarily logical,” he wrote in Artforum magasine in 1967. “The ideas need not be complex. Most ideas that are successful are ludicrously simple. Successful ideas generally have the appearance of simplicity because they seem inevitable.”

Many of his works required teams of people to execute them and Mr LeWitt became known for his collaborative nature. He was systematic and methodical in his approach, likening his art to that of a composer whose works are concise in detail but allow for artistic interpretation.

He was also well known for his interest in and support of other artists.

On his passing, Sol LeWitt had a private collection of over 11,000 objects that “he had traded, or exchanged or purchased with artists”, explained Natasha Bullock, the NSW Art Gallery’s curator of contemporary art. “So he was a man of great generosity and a big supporter of other artists.”

He had a great belief in the democratic nature of art, she said. “It wasn’t just about art works for people to buy. He wanted people to be able to enjoy it.”

“The walls are the newspapers of the people,” Sol LeWitt had once said.

Ms Bullock believes it was Mr LeWitt’s fascination with the nature of lines that lead to his interest in indigenous art. Lines feature in his precisely constructed wall drawings and much of his work focuses on “the way lines function to create the cubes and the grids that form his structures,” she said.

Later in life, and particularly after 1998, his art works became more open and gestural. Ms Bullock believes it was this quality in Ms Kngwarreye’s art that so fascinated him.

“Just thinking about the problem of the line, the dynamic nature of the line, the way the line can be manipulated…I think in Emily’s work, he saw that freedom, that gesture and I think that is where the correlation lies,” she said.

Included in the exhibition are indigenous works from the Sol LeWitt estate, including Ms Kngwarreye’s pieces which held pride of place in the artist’s home. There are also letters he wrote to Mr Kaldor and other artists, plus notes he made about certain works and small graphic pieces.

Mr Kaldor said Sol LeWitt had been an inspiration to modern artists because he had found new ways of expression.

‘Sol LeWitt: Your mind is exactly at that line.’ is on view at the Art Gallery of New South Wales until August 2014.