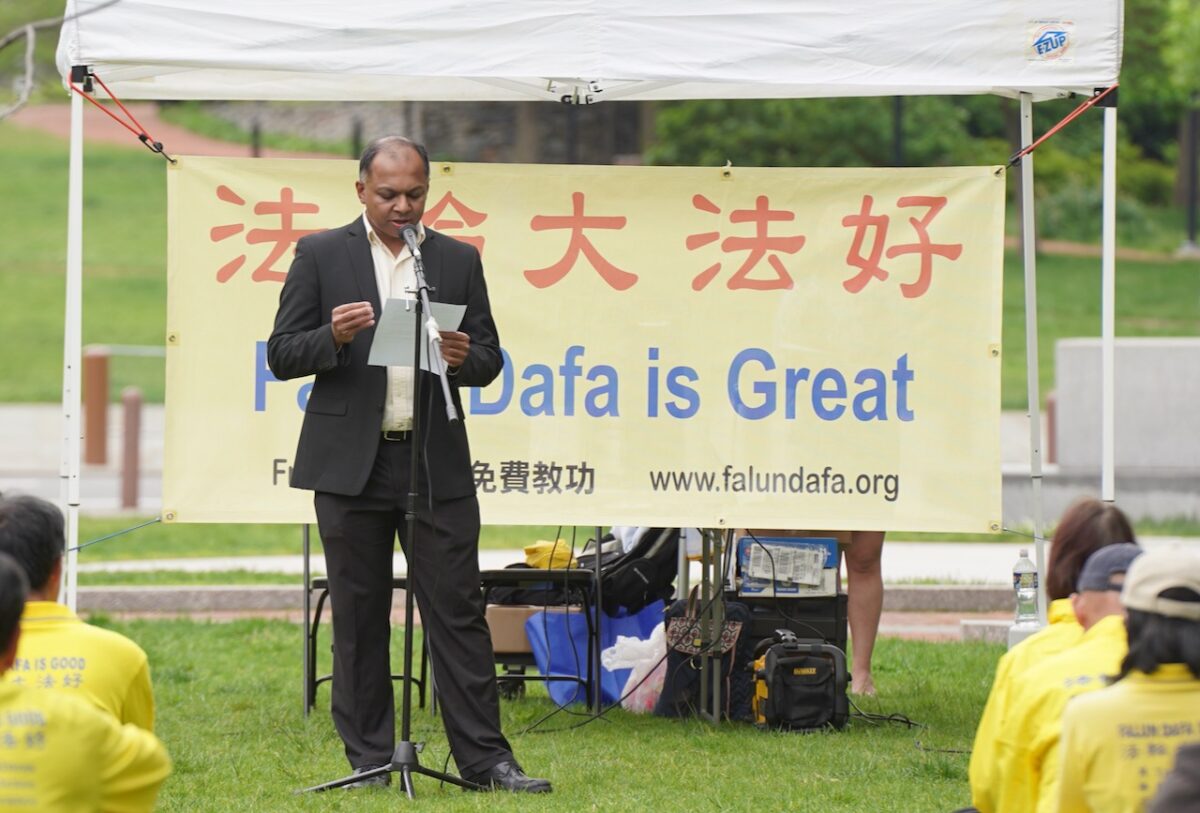 A software engineer shares his incredible story of recovering from a serious health problem that doctors could not cure. Falun Dafa, an ancient Chinese spiritual practice, gave him hope and changed his life for the better.

On May 15, Santhosh Krishnamurthy spoke at a rally to celebrate World Falun Dafa Day at Independence National Historical Park in Philadelphia. He also raised awareness of the Chinese regime’s ongoing persecution of the practice in China.

Krishnamurthy was born in South India. In 2005, he and his wife immigrated to the United States, and they now reside in Chester Springs, Pennsylvania. Krishnamurthy said that in 2015, despite a healthy lifestyle, he developed a serious health issue that doctors could not explain or cure.

He felt disappointed, frustrated, and hopeless.

“Even though I was blessed with everything, I felt empty inside.”

A work colleague told him about a spiritual cultivation practice of mind and body called Falun Dafa. The ancient Chinese spiritual practice consists of simple, slow-moving meditation exercises based on the universal principles of Truthfulness, Compassion, and Forbearance.

“I became very much drawn and curious to learn more about this practice. I started reading and gathering a lot of information and also started to practice the exercises in addition to reading ‘Zhuan Falun,’ the core teaching, at home by myself,” Krishnamurthy explained.

“The more I learned and did the exercises, the more I felt de-stressed and wonderful. After just a few weeks of practicing, my health conditions started improving, and, to my surprise, I was completely cured. I felt full of positive energy and was always in high spirits.”

Krishnamurthy‘s family members and co-workers began to see the dramatic positive change in him.

“I started to have a lot more empathy towards others, having a compassionate heart in everything that I do and, most importantly, maintaining a calm and serene attitude even during challenging situations in life,” he said.

After seeing Krishnamurthy’s positive transformation, his mother, aunts, and grandmother took up the practice three years ago.

Sharing that Falun Dafa has become his moral compass guiding him in a positive direction, Krishnamurthy said that he wanted his experience to serve as an example that “this practice is not only good, but everything that the Chinese Communist Party has said against Falun Dafa is completely baseless and full of lies. This practice has benefited millions of people around the world who have gained health, goodness, and prosperity.”

He hopes that the world’s people can understand the evil and corrupt nature of the Chinese Communist Party (CCP).

Also known as Falun Gong, Falun Dafa is an ancient Chinese spiritual practice consisting of qigong exercises and moral teachings that promote living life according to the principles of truthfulness, compassion, and tolerance. However, the CCP’s regime launched a brutal campaign to eliminate the practice in July 1999 due to its growing popularity, which had attracted 70 million to 100 million adherents in China—more than the number of Party members.

Since then, millions have been detained in prisons, labor camps, and other facilities, with hundreds of thousands tortured while incarcerated, according to the Falun Dafa Information Center. Detained adherents also have been victims of forced organ harvesting, resulting in an untold number of people being killed for their organs to fuel the lucrative transplant industry in China.

In closing his remarks at the rally, Krishnamurthy noted that the Liberty Bell, the main attraction of Independence National Historical Park, “stands as a symbol of freedom in this great country of United States of America.”

“I sincerely urge everyone to learn more about this wonderful practice, stand against the ongoing persecution in China, and completely reject the evil Chinese Communist Party.”

Krishnamurthy asked the audience to remember and cherish these words: “Falun Dafa is good! Truthfulness, Compassion, and Forbearance are good!”