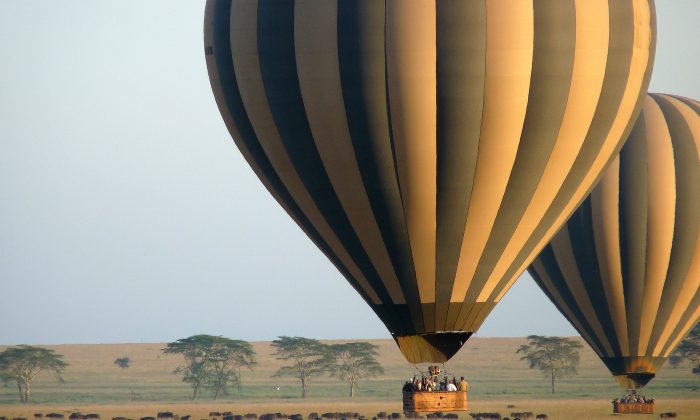 Hot air balloons glide above a wildebeest migration on Tanzania’s Serengeti Plain, arguably the most famous national park in the world. Every year, the wildebeest undertake a long and hazardous trek to seek fresh grazing. (Barbara Angelakis)
Africa

Soaring Over the Endless Serengeti Plain

The wakeup call came at 3:30 A.M. and jarred me out of a sound sleep. “Good morning, and how are you today, Ms. Barbara? Did you sleep well?” a friendly voice inquired. Regardless of the warmth of the caller, it was chilly outside the cozy down coverlet, pitch black, and hardly morning! Still, I bounded out of bed in anticipation of my long-awaited adventure in Tanzania: a hot air balloon ride over the Serengeti Plain—certainly a worthy cause for a little sleep deprivation.

I quickly dressed and proceeded to the lobby to meet my fellow travellers. Downing coffee and sweetbreads baked fresh for our early departure, we were on our way by 4:30 a.m., bumping along the unpaved road toward the Serengeti Balloon Safaris launch site.

The rains had transformed the savannah into a carpet of green grass broken only by fields of colourful wildflowers.

As we made our way in the blackness of the African night, the headlights of our Land Rover reflected eyes up ahead and we slowed in time to see a pack of yellow spotted hyenas crossing the road just in front of us. We stopped to give them the right of way and, like the other animals we encountered in the Serengeti, they appeared unafraid of the large, noisy, rapidly moving “animal” with big round unblinking eyes or the curious stares from inside the belly of the beast.

Further along we encountered a pod of hippos that also wanted to cross the road, then we turned off-road and had to concentrate our attention to holding on for dear life as we crossed the muddy, uneven terrain.

In the dark we could just make out the massive shapes of the balloons laid out on the ground with tender lines attached to what appeared to be large rectangular baskets opened on the side.

When light finally broke along the horizon, we were directed to one of the balloon sites. Our designated captain, Jaõa Rodriguez, explained that each basket was large enough to hold 16 people in 8 separated compartments on 2 levels. He explained how to grab the handles attached on the inside of each compartment and flip in horizontally, feet first, with those assigned to the top level entering first. Then the people on the bottom level swung in and held on until the green and gold striped balloon was fully inflated, and with a shout we were jerked upright and lifted straight up over the “endless plain.”

Siringitu is the Maasai word for “endless plain,” and contrary to popular translation of the word Serengeti, the emphasis should be on the first syllable. A UNESCO World Heritage Site, the Serengeti spans 5,700 square miles of grassland, savannah, woodland, and forest. It is home to over 1.5 million wildebeest and more than 200,000 zebra along with everything from lions, elephants, gazelles, and rhinos to Cape buffalo, ostriches, baboons, and leopards, not to mention over 500 species of birds and water fowl.

The Serengeti also hosts the amazing annual wildebeest migration that takes the animals from their breeding ground in the grasslands of the south, westward past the swampy savannah and across the crocodile-infested Grumeti River, into the northern woodlands—a dangerous journey that challenges the survival of all but the heartiest of animals.

Captain Jaõa controlled our ascent into the now picture perfect blue sky with flame bursts from the powerful state-of-the-art whisper burners, taking us from tree level—where we got a bird’s eye view of hippos lazing in the river-fingers swollen from the early rains—to high over the herds of wildebeest. Silently we soared over thousands of animals—silent that is except for the squeals, oohs and aahs emanating from me and my fellow passengers, and the whoosh of the burner spewing fire.

The rains had transformed the savannah into a carpet of green grass broken only by fields of colourful wildflowers. With only the shadow of our balloon racing across the ground to reflect the speed at which we were traveling, we glided over the Seronera Valley and the Western Corridor the better part of an hour until we spied the chase vehicles below and slowly descended onto a field.

We had been warned that, depending on the winds, the basket might land on its side and we would have to quickly scramble out on hands and knees to allow the top level passengers to disembark without stepping on us. Luckily we landed upright, and proceeded to tables under an acacia tree set up for the traditional champagne toast.

The champagne toast originated in 1782 in France when inventor brothers Joseph and Étienne Montgolfier mounted a trial flight of a hot air balloon. The balloon landed in a farmer’s field, frightening a group of locals who showed up with pitchforks at the ready. Joseph concluded that if man was to attempt to assent and land sans pitchfork attack, he would have to make a peace offering. Thus was born the tradition of the celebratory champagne toast after every balloon flight, and enriches the experience to this day.

We were whisked off to the tables, which were set with bone china and silver cutlery, and served a hearty English breakfast by turbaned stewards in traditional Swahili dress. There was even a loo setup out in the field, modestly enclosed for privacy. Sated and elated, we boarded our vehicles to begin our safari odyssey in Tanzania, the “Land of Kilimanjaro, Zanzibar, & the Serengeti.”