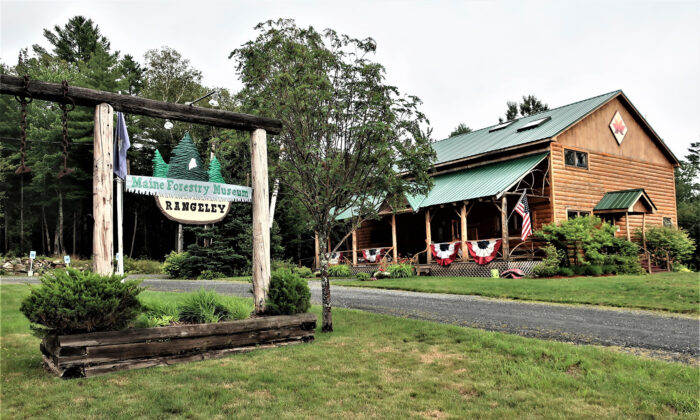 Small Museums in Rangeley, Maine, Whet the Appetite for More

New York has its Metropolitan Museum of Art and Washington, the Smithsonian Institution. Other cities and towns, large and small, throughout the United States are also home to museums that relate a variety of intriguing stories. A bit of research is likely to turn up interesting collections close to where you live that warrant a visit.

I came across one example in two tiny towns in the lakes and mountains region of western Maine. Rangeley (population about 1,100) and the much smaller nearby village of Oquossoc have three museums that portray the interesting local history and bring to life the hardy people who made it. These institutions more than make up in appeal what they lack in size.

Native American lore is but one reason that Yankee magazine twice has recognized the Outdoor Heritage Museum in Oquossoc as the “Best Outdoor Museum in New England.” I soon learned why during my visit. I started my tour in a one-room cabin that was built by a wildlife trapper around 1920. It’s stocked with rustic furniture that he made and other objects from that time. An informative video, one of several scattered throughout the building, sets the scene.

The tale begins with the Abenaki, Penobscot, and Mi’kmaq Native Americans who lived in the area 14,000 years ago, attracted by its outstanding hunting and fishing. One room is devoted to their part of the local lore. A video relates the tale, and woven baskets and ceremonial root clubs are among paraphernalia that adorn the walls.

Other exhibits recall the evolution of the Rangeley region into a fishing mecca for giant brook trout and, later, landlocked salmon. As word of catches of giant fish spread, anglers from near and far began to visit. As their numbers grew, two railroads transported the sportsmen—and sometimes their families—to the area. Once there, they boarded steamboats that carried them to imposing hotels along the shorelines of lakes that dot the forests.

Then came the post-World War II popularity of driving vacations and construction of the Dwight D. Eisenhower National System of Interstate and Defense Highways, which caused a downturn in the region’s allure as a stay-put vacation destination. Since then, however, outdoor options from fishing, hiking, and watersports to winter skiing and snowmobiling have created its resurgence as a four-season resort area.

The Maine Forestry Museum, located just outside of Rangeley, tells a different tale. The focus there is forestry and conservation, and they seek to instill an appreciation for the state’s natural resources. Forestry in Maine goes back hundreds of years, and it continues to contribute much to the economy.

Videos, photographs, and paintings scattered about the museum provide visual introductions to the industry. The three-story structure—one of the tallest in the low-rise town—is packed with tree-cutting saws in many shapes and sizes, hand tools, models of logging trucks and equipment, and several dioramas that depict various aspects of lumbering.

The collection continues outdoors with an assemblage of drag saws, bolt-wood saws, and other contraptions identifiable only by the explanatory signs. Ice-cutting saws and a braking device used to ease horse-drawn sleds down steep icy slopes were used during challenging winter tree-cutting operations.

Most meaningful were the introductions to some of the men who braved challenging elements to support themselves and their families. Among the memorabilia are 19th-century letters written by loggers to their loved ones and a personal journal kept by a logging-camp doctor.

Another journal, in which grocery store records were kept in 1907, now serves as a sign-in register at the Rangeley History Museum. The little red-brick building that houses it once served as a bank and, later, as the police station. A reminder of that time is a compact cell in the basement in which a “prisoner” sleeps on the top cot.

Photos of Main Street as it was a century ago and a model of one of the steamboats that used to transport visitors to hotels during Rangeley’s “gilded age” are among reminders of days long gone. Other photographs recall a more recent occurrence, the time when President Dwight Eisenhower visited Rangeley in 1955 to engage in his favorite pastime of fly-fishing in one of the area’s productive lakes.

From fishing to forestry, Native Americans to loggers to well-heeled sportsmen, stories of the Rangeley region and its people are as interesting as they are varied. It’s likely that other museums that tell different but no-less-intriguing stories are located not far from where you live. A little time spent researching can provide a big payoff for an interesting leisure-time activity.

The museums that tell stories of the Rangeley area are open seasonally, so check in advance for opening dates and times: RangeleyMaine.com or 207-864-5571.