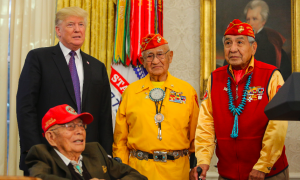 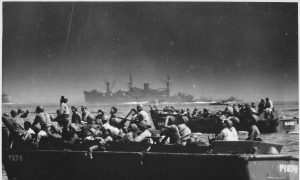 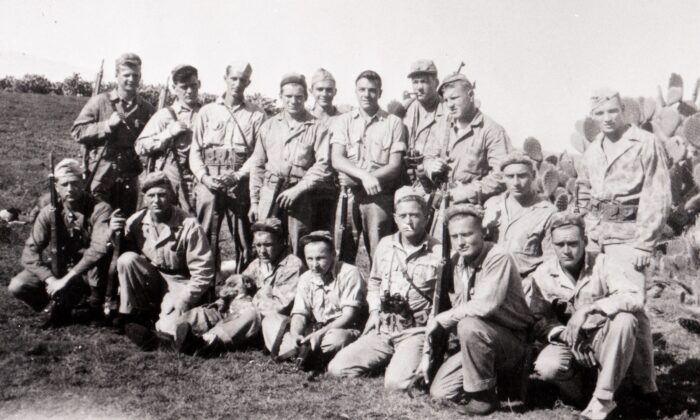 Ski’s 40 Thieves: The Elite Platoon of US Marines Who Worked Behind Enemy Lines on Saipan

While the Allies defeated Nazi Germany on May 7, 1945, it would take another three months of intense combat in the Pacific theater to bring an end to World War II. In June of that same year, Allied forces arrived on the island of Saipan, which was long considered to be the last line of defense for Imperial Japan—putting mainland within striking distance of U.S. B-29 Superfortresses.

In time for the 75th anniversary of the signed surrender of Imperial Japan, a new history book details how an elite platoon of U.S. Marines fought behind enemy lines on the islands, and how their undercover operations would prove critical to ending the war.

In “40 Thieves on Saipan: The Elite Marine Scout-Snipers in One of WWII’s Bloodiest Battles,” Joseph Tachovsky uncovers the story of his father, a lieutenant in the U.S. Marine Corps who never spoke to his son about the war. It was only after his father, Frank, passed away in 2011, at age 96, that Tachovsky learned that he’d been part of an elite platoon of Scout Snipers.

After the funeral, Tachovsky came across a 1944 December issue of the Marine Corps Leatherneck Magazine, which featured an article about the platoon, titled “Tachovsky’s Terrors.” A son of one of the Marines mentioned in the article had left a comment online, pointing out that everything in the article was true except for the name of the unit. It was actually called “Ski’s 40 Thieves,” in reference to Frank.

It led Tachovsky to his father’s “off-limits” footlocker, which had been kept a secret. Though Tachovsky had once walked in on his father examining its contents, he had never seen them. Now, opening it for the first time, he found the platoon’s roster, letters, photographs, a Silver Star (from the president of the United States and presented by Admiral Chester Nimitz, as it turned out), and more memorabilia.

“It was like a big Christmas present, finding all of these things that, at the time, made no sense,” Tachovsky said.

Tachovsky found another edition of Leatherneck Magazine in the footlocker, which featured a memorial article about the Battle of Saipan. He looked at the roster again and found that some of the names matched some of those mentioned in the article.

The platoon was an elite group from the Marine Corps Sixth Regiment. During World War II, only two of these Scout Sniper units had ever existed. They were trained to live and serve behind enemy lines for days and sometimes weeks at a time. They were tasked with collecting intelligence, locating enemy installations for bombardment, and generally disrupting the Japanese forces however they could.

The Marines were equipped with 1903 Springfield rifles, and their scopes allowed them to hit targets that were up to nearly a mile away with incredible accuracy. However, firing their weapons was often the last resort, so they were also skilled at using less conspicuous weapons, such as knives and piano wire. All were trained in demolitions and carried two-pound blocks of TNT. The Japanese were most active at night, so the platoon would track them then and sketch maps from memory.

These Marines had a reputation for stealing equipment. When they arrived on Saipan, they were only equipped with World War I-era weapons and rations, and would often steal from U.S. Army and Navy supply stations, which were better-equipped. In one instance, they even stole an Army captain’s Jeep.

Frank also sought out a certain type of Marine for his Scout Sniper unit.

“When they were looking for men, he didn’t want to interview the men right away. He just wanted to look at their record books,” Tachovsky said.

Bill Knuppel, a longtime friend of Frank who had served as a sergeant in his platoon, said Frank was looking for Marines who had been in the brig for fights, because it showed they could handle themselves in tough situations.

“The winner of the fight is thrown in the brig. The loser goes to the infirmary. The guy in the brig is the kind of guy I want,” Frank had told Knuppel.

Once, a platoon squad leader named Martin Dyer led a mission during which they discovered a huge assembly of Japanese troops in a valley, which Tachovsky believes was the headquarters of Lt. Gen. Yoshitsugu Saito, who commanded the Japanese forces at the Battle of Saipan. Dyer was awarded the Navy Cross, the Navy’s highest honor, for his actions in delivering the information and coordinates for a bombardment.

“There were many instances where they worked behind enemy lines, deep into enemy territory, and brought back information that helped line troops advance more rapidly and with less opposition,” Tachovsky said.

When Tachovsky discovered the roster and magazine article in his father’s footlocker, he used the hometowns he had gathered from Knuppel to track down the other men in the platoon.

He found out who might still be alive through Marine Corps documentation, and sent them handwritten letters, knowing that they most likely did not have email. Four Marines—other than Knuppel—were still alive. Two surviving wives and several sons also wrote back.

Tachovsky set out to travel the country, meeting with the men, forging friendships, and learning from them.

In West Virginia, Roscoe Mullins told Tachovsky he looked just like his father. Mullins told him about the cruelty the Japanese inflicted on Allied prisoners, and how the platoon had voted and agreed that a wounded Marine of theirs would never be taken alive.

In Oklahoma, Tachovsky told Bob Smotts that if the Sooners ever made into the college football playoffs, he’d watch the game with him.

In Montana, he spent six days at Marvin Strombo’s bedside in the hospice. When it came time for Tachovsky to leave, Strombo pointed at him and said, “Semper fi.”

“All of these old fellows became like second fathers to me,” Tachovsky said.

He learned that his father had once saved the entire platoon when he destroyed a Japanese tank with a bazooka. When the men spoke about their friends who had been killed on Saipan, they rarely let any emotion show. However, when they talked about the Japanese mass suicide at Marpi Point, they would all choke up. There, Japanese civilian families waded out to sea or jumped off 800-foot cliffs to evade capture. Many believed the Japanese propaganda that horrific deaths would await them at the hands of the Americans if they were ever captured.

Knuppel gave Tachovsky a box of photographs and other memorabilia. After handing him the box, Knuppel looked at him and said, “This would make one good story.” That’s when Tachovsky decided to compile all of these story pieces into a book.

In telling the story of the platoon, he wanted to show the nobility of these Marines, and the trauma they survived and lived with. Half of the royalties from the book will be donated to veterans organizations.

“I felt it almost a duty to put their stories together and tell their stories, because they were so reticent to do so for their entire lives,” Tachovsky said.