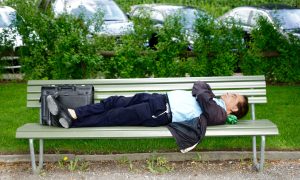 Biological clock affects the daily rhythm of many physiological processes. This diagram depicts the circadian patterns typical of someone who rises early in morning, eats lunch around noon, and sleeps at night (10 p.m.). Although circadian rhythms tend to be synchronized with cycles of light and dark, other factors - such as ambient temperature, meal times, stress and exercise - can influence the timing as well. (CC2.0)
Home & Gardening

Skip the coffee, have a cup of Circadian instead

If you are among the millions of Americans who suffer from fatigue and insomnia, there may very well be a light at the end of the tunnel, a circadian light that is.

No it’s not the latest saber from the latest Star Wars movie. It is new age lighting that simulates a very old light — the sun, while cancelling out the ill effects of traditional indoor lighting. And it is showing promising results in warding off unexplained fatigue as well as a whole host of diseases including diabetes, cancer, obesity, and even depression.

If it sounds anecdotal, then you may very well be living in the dark.

The New York Yankees, Seattle Mariners and the Atlanta Falcons are among major league sports teams who have switched to circadian lighting in their locker rooms in effort to to put bigger numbers on the scoreboard.

Hospitals have installed circadian lighting in operating rooms to help surgeons stay awake through long surgeries and retail giants like Whole Foods now illuminate their stores with the biological lighting.

The Saint Barnabas Medical Center was so turned on by the idea that it built a circadian light-based neonatal intensive care unit specifically designed to help improve development of at-risk newborns.

Dr. Kamtorn Vangvanichyakorn, Director at the Neonatology at the New Jersey facility says the benefits have been especially noticeable in premature babies. “It’s really helping preemies eat better ,take the bottle better, improve motor coordination and make them less fussy,” said Dr. Vangvanichyakorn, “we have even seen it shorten their stay on the ventilator.”

It all started when a couple of brainiac scientists began researching a link between artificial lighting and sleeping disorders.

They identified a narrow band of blue light found in the proverbial lightbulb that affects something called our circadian rhythm, a sort of master internal human clock that controls our sleep cycle and its relationship with the rest of our bodies.

The biggest influence on our circadian rhythms is light exposure. The scientists discovered that exposure to blue light at night causes the loss of the sleep hormone melatonin and overtime, weakens the immune system.

Circadian lighting corrects that by having the ability to fine tune its color and intensity, according to the time of day, that is — night.

Experts say the most vulnerable to the side effects of circadian light disruptions are people who work at night — that’s three million Americans according to the U.S. Bureau Labor Statistics.

Studies in fact have overwhelmingly shown that blue-rich light in the evening increases the risk for such serious conditions as heart disease by as much as 40 percent in night shift workers. There have been similar findings with a high rate of breast cancer in professionals including nurses who work the overnight shifts. And one Harvard study showed a significant rise in blood sugar levels of diabetics who work at night.

“Light at night is part of the reason so many people don’t get enough sleep and can’t stay awake during the day,” said Stephen Lockley, a Harvard sleep researcher, “and that leads to all sorts of medical consequences.”

It has even infiltrated the race car industry. BMW Motorsports equipped its cars with a type of circadian light that illuminates the cockpit of drivers competing in The Nurburgring, a 24-hour endurance race that draws an average participation of 200 cars and 700 drivers each year.

Maybe circadian lighting should be added to the list of such new car safety features as pedestrian detection, automatic emergency braking and advanced collision warning.

According to AAA’s Foundation for Traffic Safety, 21 percent of all fatal crashes in the U.S. are caused by driver fatigue.