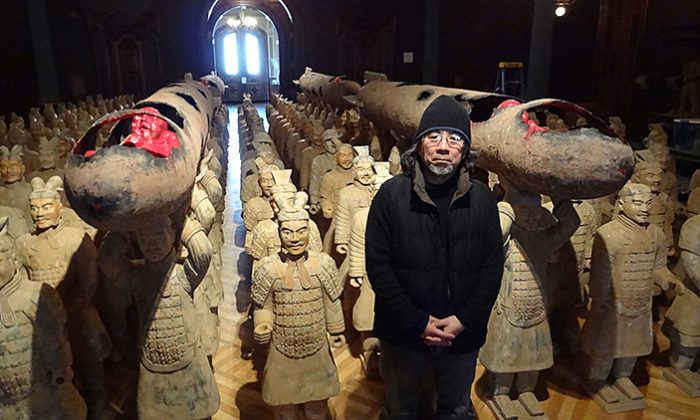 SACRAMENTO, Calif.—The familiar image of endless rows of terracotta warriors represents the power of an ancient civilization. Chinese artist Mr. Gong Yuebin’s new exhibit of such an epic sight will open in Sacramento’s Crocker Art Museum on March 10. But do not mistake it to be a replica of China’s first emperor Qin Shi Huang’s tomb site; viewers will be surprised with powerful and thought-provoking messages.

The monumental project titled Site 2801 sits in the historic building housing Crocker Art Museum’s ballroom. This unique location allows viewers to experience the exhibit from ground level and above.

Two hundred terracotta warriors, based on models of those unearthed in 1970 in Xi’an, China, are displayed in formation. Mixed in the ranks are an additional 10 modern combat soldier statues, in helmets and uniforms. Four nuclear missiles, made of fiberglass, are carried by the warriors above their heads. Viewers are invited to be confronted with this “unearthed archeological site” from the future.

“The Xi’an terracotta warriors displayed Qin Shi Huang’s power 2,000 years ago. I feel that the human world did not change very much; people are always fighting in the name of their nation, belief, and their children,” Gong said. “However, it’s often some unspoken desires that drive them to war and conquest.”

Inside each of the decaying, rusted missile shells lays a baby’s statue, covered with blood red paint. Gong explains, “Babies represent future, peace, and hope; wars and human violence destroyed that… If you look at the baby’s face, it’s of an old man.”

Gong spent three months in Xi’an to produce these warriors. The statues are made of the same clay material used in the Qin tomb 2,000 years ago, sourced from Li Mountain, about 30 miles from Xi’an. The Qin terracotta statues were initially painted with bright colors, and later blackened from a fire set by Xiang Yu, who conquered Qin, and then buried in clay for 2,000 years. When the artist created the statues, he used a three-layered paint process to retrace the historical steps of the statues.

Mr. Scott Shields, Chief Curator of the Crocker Art Museum, was very glad they are the first to exhibit “Site 2801.”

“Crocker doesn’t have a lot of room; our travel exhibit space has been fully scheduled until 2015. We had to think creatively and rearrange a few things to exhibit Gong’s project.”

When Shields visited Gong’s studio in downtown Sacramento two years ago to view his exhibit “Life’s Crossroads,” he was impressed and realized the uniqueness of Gong’s creations.

“I receive many requests from artists all over the country to exhibit in Crocker, but when I got Mr. Gong’s nicely designed introduction DVD package, that got my attention,” Shields said. “Then, when I saw the project introduction of ‘Site 2801,’ I wanted to have it in Crocker.”

Gong’s childhood was filled with traumatic experiences during the Cultural Revolution in China. His teacher parents were labeled “rightist” and forced to move to the countryside for agricultural servitude. Gong remembers witnessing his parents being persecuted and publicly humiliated. His childhood was filled with hunger, worry, and fear. Painting and drawing was one way he could find some peace. The physical and mental hardships in those years planted the seeds of great concern about the human world for the artist’s future work.

In 1978, Gong began his art training at Luo Yang Art College. His talent in figurative ink painting was quickly recognized and received numerous awards. After China’s economic reform, Gong’s artistic talent was put to use as the Art Director of the Guangzhou Radio and Television Station. In 2004, Gong made a full return to fine art and immigrated to the U.S. with his family. He opened a studio in downtown Sacramento.

“As an artist, I feel I can produce some real projects of my true feelings after I immigrated to the U.S.,” Gong explains. “I created these four large-scale installations that can express my real concerns and life experiences. I hope my art can provoke people’s minds to think about human lives and this world.”