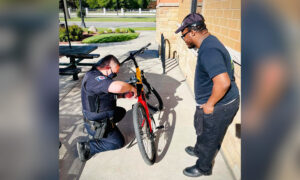 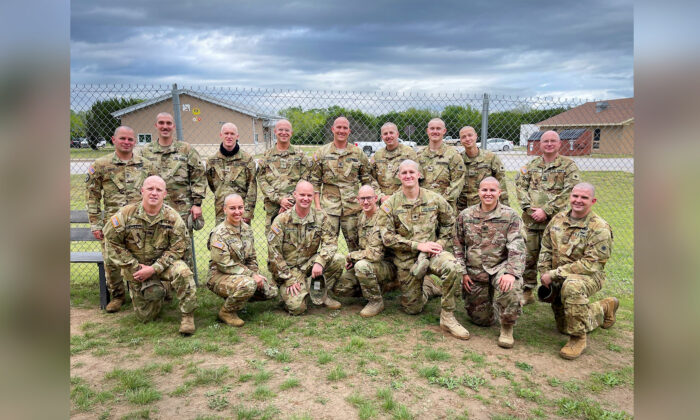 Sister of US Soldier Loses Her Hair Battling Cancer, so Compatriots Shave Heads in Support

Over a dozen soldiers currently stationed in Kuwait recently shaved their heads in support of a fellow serviceman’s sister, who lost her hair during her battle with brain cancer.

Sgt. Brandon Stafford’s older sister, Melissa Hjelle, who works as a traffic safety program coordinator in Minnesota, was diagnosed with a brain tumor in her right temporal lobe in late 2020.

On March 4, 2021, she underwent cranial surgery, which removed a large portion of the tumor—with the remaining cancer requiring radiation and chemotherapy.

She managed to recover from surgery with some success, but then she endured the side effects of the treatment that followed.

“I am experiencing fatigue and consistent nausea from radiation and chemotherapy, along with some other nuisance side effects,” she said.

Melissa was certain that she would eventually lose her hair because of the chemo; soon enough, her hair started falling out by the handful.

“However, the morning that I began brushing my hair and it literally fell out in clumps left me an emotional mess,” she said. “I shared with my family that the time had come, and I was making plans to shave the rest soon.”

Stafford was in North Fort Hood in Texas on a pre-deployment training exercise at the time. And his sister’s condition bothered him often.

After she decided to shave her head, her older brother Sean, a retired Army National Guard master sergeant, organized a shaving party on a group video call.

Sean and his two sons, Jack and Marty, along with Brandon, all shaved their heads in solidarity with Melissa as she underwent her treatment.

Then, when Stafford’s fellow battalion members kept asking him why he’d shaved his head clean, he explained the reason. In support of Melissa, 15 of his comrades in arms, without any prompting, followed suit.

“I just kind of wanted to do my part to show her that it is alright and we are one big family,” said Cpl. Justin Huberty, a CH-47 Chinook helicopter crew chief.

The decision was a big step for Derek Vollmer, another soldier, who said that, as he’s fair-skinned, his red hair helps him avoid sunburn, but he went ahead and shaved it all off anyway.

Then, the band of soldiers took a group photo and it was posted on Facebook, to Melissa’s astonishment.

“At first, I thought it was a regular crew photo and then quickly realized there was an unusual amount of bald heads!” she said.

She was left in shock and disbelief that they’d do such a thing for her sake.

“The timing could not have been more perfect; I was having my worst week of feeling ill yet and was experiencing a full-blown crying session to cope with it all when that photo arrived,” she added.

The show of love gave Melissa the much-needed encouragement and motivation to keep pushing forward toward a hopeful recovery.