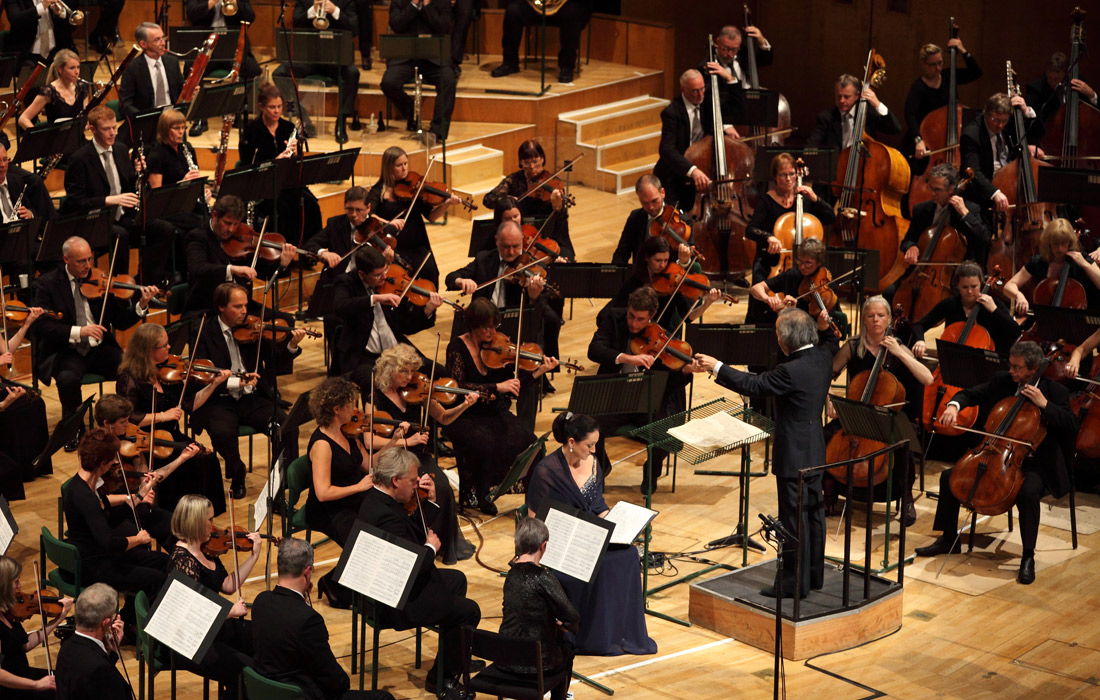 The composer Sir Charles Villiers Stanford (1852–1924) is so well-known as a cornerstone of Anglican and Episcopal liturgical music that it seems surprising he has a significant body of major works that are still rarely, if ever, performed. Yet his “Mass Via Victrix (1914–1918)” just received its first performance on Oct. 27, 2018.

It is a major, mature work. Stanford wrote it during World War I, with the vocal score bearing the date December 1919 (by which time Stanford was 67). Though Boosey and Hawkes published the vocal score, the work was never fully performed, with only the Gloria performed in a version with an organ.

“Mass Via Victrix (1914–1918)” is a large-scale concert work for four soloists, chorus, and orchestra, and its belated premiere was held at BBC Hoddinott Hall in Cardiff, Wales, where Adrian Partington conducted the BBC National Orchestra and Chorus of Wales with soloists Kiandra Howarth, Jess Dandy, Ruairi Bowen, and Gareth Brynmor John.

The work was prepared for performance from Stanford’s autograph manuscript by the Stanford scholar Jeremy Dibble (a professor of musicology at Durham University and author of the standard biography on Stanford). I spoke to him via Skype to find out more about the background of the Mass.

I was curious as to why the work was not performed, especially as Stanford clearly intended it to be a World War I commemoration; it includes the date range “1914–1918” in the title. Dibble feels that Stanford was something of a casualty of the change in musical attitudes after the war.

In fact, Stanford touted a number of large-scale works around to publishers, failing to get them placed. His style was seen as old-fashioned, and he was very much associated with German music (as well as Cambridge). (He studied in Berlin and Leipzig and held Brahms very much as an exemplar.)

Unfortunately, attitudes had changed as a result of the war, so he failed to find publishers for his Violin Concerto No. 2 and his Irish Rhapsody No. 5 (which was dedicated to the Irish Fusiliers).

Though Stanford wrote a lot of church music (mainly for the Anglican liturgy, but there is a Roman Catholic Mass too), “Mass Via Victrix (1914–1918)” is very definitely a large-scale concert work. Dibble feels it can be placed alongside Stanford’s Requiem (written for the Birmingham Triennial Music Festival in 1897), the Te Deum (written for the Leeds Festival in 1898), and the Stabat Mater (written for Leeds in 1907). All four are big symphonic works, almost operatic at times. We often forget that Stanford was an aspiring opera composer; after all, he did write nine operas.

Stanford never heard a performance of the Mass, but the Gloria was performed with organ at King’s College, Cambridge, as part of a concert by Cambridge composers for the new Chancellor Arthur Balfour in 1920. Stanford was still a professor of music, so his music was included alongside composers such as Ralph Vaughan Williams and Cyril Rootham.

Dibble finds the Mass couched in late 19th-century Romantic style, though influences stretch beyond Brahms and German music. Quite a lot of the dramatic music in the Mass draws from Stanford’s studies of French and Italian opera. Dibble sees the quasi-funeral march in the Kyrie as having hints of the Italian verismo school. He also mentions the remarkable Agnus Dei, where the singers are confined to the outer sections, and the central section is a powerful, purely orchestral funeral cortege. The opening of this movement is striking for the combination of soprano soloist and viola obbligato.

As the two longest texts of any of the movements of the Ordinary of the Mass, the Gloria and Credo are inevitably the two longest movements of Stanford’s “Mass Via Victrix.” Both are multisectional, with soloists and chorus interacting in dialogue in an almost operatic manner.

In the two movements Gloria and Benedictus, Stanford quotes from his Stabat Mater, referencing the agony and loss of Mary at the foot of the cross. Though there are joyful moments in the Mass, it is very much an introspective piece, commemorating the death of over a million men during the war.

Though the work premiered in Cardiff, there will be plenty of opportunities for everyone to hear it as it is being recorded by the BBC for broadcast on BBC Radio 3 in November, and it will be issued on disc by Lyrita.  It will be coupled with Stanford’s 1920 work for chorus and orchestra “At the Abbey Gate,” which Dibble sees as having been inspired by the creation of the Tomb of the Unknown Warrior at Westminster Abbey in 1920, a moment of catharsis after the war. It is a big choral slow march, and in it Stanford quotes the “Dead March” from Handel’s “Saul.”

We still have a lot to discover about the late Stanford. His “A Song of Agincourt,” a long symphonic poem that combines introspection and heroism, has only fairly recently been performed by the Ulster Orchestra (in 2014), and his Violin Concerto No. 2 long remained in only manuscript, though Dibble has now orchestrated it from Stanford’s manuscript.

But one of Dibble’s points about Stanford is that we perhaps still view him wrongly:  Though his symphonies and church music were important, Stanford thought of himself as an opera composer. None of his operas have been recorded, and most are rarely, if ever, performed.

That is gradually changing. The New Sussex Opera is performing Stanford’s “The Travelling Companion” this autumn and recording it too for SOMM Recordings; for Dibble, this work is Stanford’s best opera.

His first opera, “The Veiled Prophet,” premiered in 1881, while “The Travelling Companion” is his last, written in 1916 but premiering in 1925 after Stanford’s death.

Stanford enjoyed real success in opera only with “Shamus O’Brien,” a work with spoken dialogue that premiered in 1896. (Vaughan Williams, one of Stanford’s pupils, would comment sarcastically that on Stanford’s centenary in 1952, Covent Garden celebrated by performing Bellini’s “Norma” when they should have been performing “Shamus O’Brien.”)

So though Stanford’s big choral works are a rather different genre, his operatic taste does rather come out in them. But Dibble is optimistic that, in time, people will get interested in the operas as well.

Stanford was quite modern in his attitudes about opera. He campaigned for performances in the vernacular. He wanted the government to sponsor an opera house performing opera in English, and as late as the 1920s was still writing letters to The Times on the subject.

The remarkable thing about this late music is how much of his work Stanford never heard. He only heard a dress rehearsal of “The Travelling Companion,” not a performance. He never heard the Violin Concerto No. 2 or the “Mass Via Victrix.”

And there are two or three other operas he never heard: He wrote an Italian opera, “Lorenza,” in the 1890s for La Scala, which was not performed, and there is another opera in English with spoken dialogue, “Christopher Patch,” which not only remains unperformed, but its libretto has been lost, so performance is tricky.

Getting Published Was a Problem

Despite all this, Stanford kept writing works in the hope that people would perform them. And he did have supporters: His pupils such as Vaughan Williams and Herbert Howells were both keen supporters of their teacher’s music.

Part of the problem is that though publishers were happy to publish vocal scores, as they could sell them to performers, they were not going to sell many full scores, so these were not published. The works remained in manuscript to be rented out.

Before ideas about commemorating the centenary of World War I occurred, people had been in contact with Dibble about performing “Mass Via Victrix,” but the fact that it remained in only manuscript form was a great hurdle.

To create the performing edition used in the performance, Dibble worked for four months using both the autograph manuscript (now in the British Library) and the vocal score for reference.

He is hoping that once “Mass Via Victrix” is available, it will generate interest as a concert work. Dibble feels that it is not only vintage Stanford but “damn fine music.”

Stanford’s “The Travelling Companion,” will be conducted by Toby Purser at the New Sussex Opera on Nov. 21 and then on tour until Dec. 2. See NewSussexOpera.org