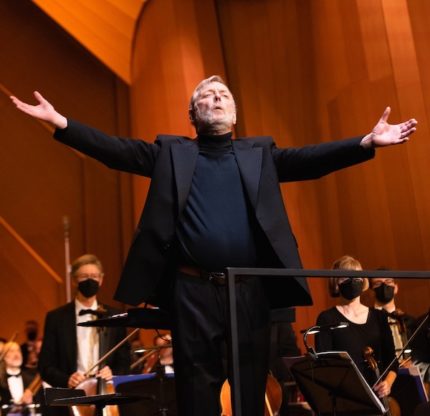 CHICAGO—In 1824, when Beethoven conducted the premier of his “Symphony No. 9 in D Minor, Op. 125,” the audience went wild with applause, giving the German composer five standing ovations when it ended. On the evening of April 1, when Sir Andrew Davis conducted that symphonic masterwork with the Lyric Opera’s orchestra, a modern audience once again gave the Ninth thunderous applause.

From its debut in Vienna to this modern revival almost 200 years later, the power and the profundity of what some (myself included) believe to be the most glorious piece of classical music ever created has not diminished.  Indeed, it was exhilarating to witness the exalted sense of life conductor Sir Andrew Davis gave to Beethoven’s last symphony. A once-in-a-lifetime combination, Beethoven and Davis were a match made in heaven.

Under Davis’s masterful baton, the Lyric Orchestra, with a fantastic choral group led by Chorus Master Michael Black, was in rare form.  It’s as though Davis, the musicians, and the vocalists knew they were playing an awesome piece of music for a memorable night.

One could feel a level of excitement as the evening’s production opened with “A Seed of Joy,” a world premiere composed by Ed Frazier Davis, the son of the conductor. It set the tone for the evening’s main attraction.

As one listened to the Ninth’s soaring, rapturous notes, it seemed incomprehensible that a man could write such sublime, breathtaking music while unable to hear it, for one of the amazing wonders of the piece is that Beethoven was stone deaf when he wrote it.

He couldn’t even hear the thunderous raves and applause that filled the Viennese auditorium at the symphony’s end. One of the soloists had to turn Beethoven, still at the podium facing the orchestra, around so he could see the audience’s stunning reaction. As music aficionados did at the symphony’s debut, modern-day fans gave a spectacular ovation for the presentation of the piece, which was the first ever at the Lyric.

At the finale, the combination of vocalizations in which the “Ode to Joy” was sung brought Schiller’s famous ode of human brotherhood to a stirring climax. Schiller’s poem on the importance of human connection seemed especially moving in our contemporary time when fellowship and good will have never been more needed.

When the Lyric Chorus made its entrance in preparation for the Ode, there was palpable excitement in the auditorium. To their credit, the chorus did not fail the high expectations.  Moreover, the solo performances were impeccable. Bass-Baritone Eric Owens, always a treasure, opened with the high notes that he does so well, and tenor Matthew Polenzani delivered a wonderful, velvety rich vocalization that is his trademark. Together Owens and Polenzani stood out as the golden-voiced highlight of the “Ode.” Mezzo-Soprano Kathleen Felty and soprano Mathilda Edge rounded out the group and were a welcome addition to the harmonious foursome.

Even after the last notes were sounded and the concert was over, one could not get the extraordinary music out of one’s head.  It reverberated long after Davis put his baton down and turned to receive the immense gratitude of the Lyric patrons. The audience was standing up, clapping, and yelling “bravo” not only for the majestic performance of the monumental Ninth, but also for Davis and his 21 years as the Lyric Opera’s music director and primary conductor.

One could see that Davis was reacting emotionally to the outpouring of the crowd. Indeed, there was a look of immense feeling on the British conductor’s face as he tried to hold back an almost tearful response to the appreciation and affection that the Lyric patrons obviously have for him.

While Davis has conducted some of the most memorable moments in Lyric’s history, leading 60 operas, which include Mozart’s “The Marriage of Figaro,” Berlioz’s “The Trojans,” Wagner’s “Das Rheingold,” Gilbert and Sullivan’s “Mikado,” and so many more, this extraordinary Beethoven concert will remain in our memories for years to come.

Although Davis stepped down from his music director’s duties last year, he will continue to conduct. We will have another chance to hear the compelling maestro when he leads Lyric’s presentation of Humperdinck’s “Hansel and Gretel” in January of 2023.

The Lyric Opera is offering on-demand streams of each of its seasonal offerings as a back-up alternative for ticket holders. On demand streaming of each opera is available two weeks after opening night of the opera and, since “Beethoven’s 9th” presentation was filmed, there is a good possibility that it too will be available for streaming.

To find out more about the possibility of watching “Beethoven’s 9th” concert on-demand, call the Lyric’s Audience Service at 312.827.5600.