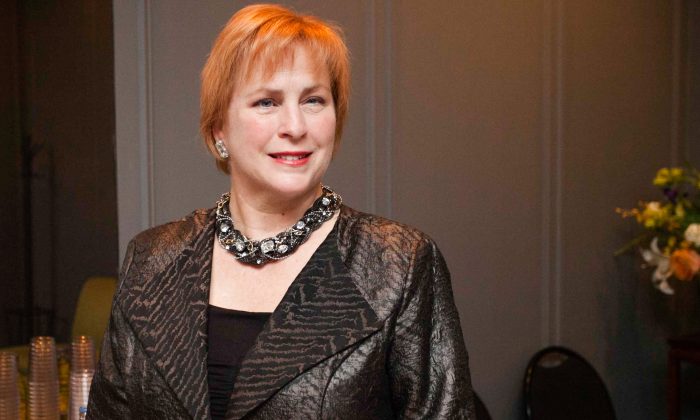 Ms. Brown was classically trained by internationally distinguished voice teachers Maria Powell, Josephine Mongiardo-Cooper, Maria Farnworth, and Siri Rico. She has performed at Carnegie Hall, among many other venues across the United States and around the world. Her latest CD, New World, was released last September.

The songs in Shen Yun are interspersed among mini-drama dance pieces that present myths and legends from across Chinese history, as well as ethnic and folk dances.

The New York-based company has a mission to revive 5,000 years of Chinese culture through story-based classical Chinese dance and music.

Shen Yun’s soloists sing in the Bel canto style, yet retain proper Chinese pronunciation and diction, according to the company’s website: “Their ability to do this is unparalleled.”

Ms. Brown said she loved the singers, and that they performed this challenging technique well.

“They did it so beautifully,” she said. “Really, it was great.”

During intermission, Ms. Brown said that tenor Yuan Qu, had “wonderful style and [was] very expressive,” and soprano Haolan Geng had “an incredibly huge voice.” Soprano Pi-ju Huang performed in the second half.

The Shen Yun Orchestra, which accompanies the dance pieces, also combines Chinese and Western musical traditions. “A Western philharmonic orchestra plays the foundation, while traditional Chinese instruments lead the melodies,” explains Shen Yun’s website. “The ensemble at once expresses both the grandeur of a Western orchestra and the distinct sensibilities of China’s 5,000-year-old civilization.”

Healing Sounds of the Erhu

Near the middle of the program, Xiaochun Qi performed a solo on the erhu, the Chinese violin.

“I was overwhelmed,” Ms. Brown said. “My entire body was trembling—but in a very loving way, I felt very joyful. It was just really spectacular.”

“It was so beautiful, it was healing,” she said.

The masters of ceremonies explained that one of the characters in the Chinese word for “music” (which has two characters) means “healing.”

The Shen Yun website describes the ehru’s range: “Its melodies can be tender or sonorous. In its lowest and middle range, the erhu is especially stirring and somber, a quality especially suitable for conveying the grand pageant of China’s history and the emotions of its people.”

Ms. Brown said she felt Shen Yun is “bringing back the spirituality, the respect, and the kindness towards one another, being truthful.”

“This is what you need to bring this artwork: make it spiritual, so it touches people’s hearts,” she said. “This is really gorgeous.”

She said if she did not have a spiritual centering, she would be lost. “It’s very chaotic, this life,” she said.

“We are all the same and we share this beautiful Earth together. … That is how it [Shen Yun] makes me feel,” Ms. Brown said.

She saw suffering and disparity in China when she went there to perform for a United Nations World Peace Day event in September. Shen Yun cannot be seen in mainland China, where the Chinese Communist Party, “has treated traditional Chinese values, centered on the idea of harmony between heaven and earth, as a threat to its existence,” explains Shen Yun’s website.

In several dances, Shen Yun presents scenes from contemporary life in China, including the persecution of Falun Dafa, a spiritual cultivation practice based on truthfulness, compassion, and tolerance.

“I think they’re [Falun Dafa practitioners] trying to find a spiritual center so that they can make their lives better, and they send that out to everybody,” Ms. Brown said. “It’s courageous for Shen Yun to present a piece like that.”

The ruling communist regime has been persecuting Falun Dafa since 1999, but practitioners have undertaken a peaceful effort to expose the unjust campaign while holding firm to their beliefs.

“Their spirit of compassion and tolerance manifest the very essence of China’s 5,000-year-old divine culture,” explains the website.

Although Shen Yun cannot be seen in mainland China, its three companies tour to 100-plus cities, with new performances every year.

“I am so happy it is brought all over the world, because people should see this level of talent, beauty and grace,” Ms. Brown said. “I think it is really wonderful.”

Shen Yun’s New York Company will be performing at Lincoln Center through April 28.