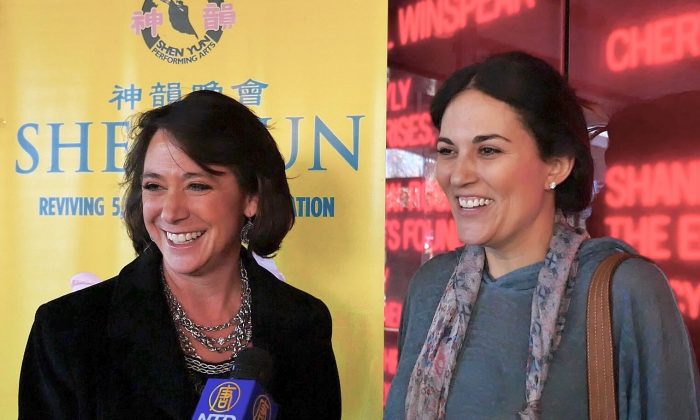 DALLAS—Seeing Shen Yun Performing Arts filled singer/actress Julie Elias with appreciation. Art and spirituality are two of the biggest things in her life, she said at the Winspear Opera House on Jan. 10, and she saw that come together with incredible beauty and skill on stage through Shen Yun’s revival of traditional Chinese culture.

Ms. Elias grew up singing in church before she was catapulted to Hollywood through her acting work. Ultimately, she found the hustle and bustle of the entertainment industry empty without something deeper driving her. That was the inspiration for her first CD “Love Rain Down,” according to her website. She had prayed to God and found her calling and wanted to help others regain their spirituality and faith through her music.

Thus, New York-based Shen Yun’s mission had a deep impact on her. The company aims to revive the authentic, divinely inspired Chinese culture through the arts—the universal languages of music and dance.

The culture is one that respects the heavens and places importance on principles like compassion and loyalty; principles stemming from religions of Buddhism, Taoism, and Confucianism, according to Shen Yun’s website. It is a culture once nearly lost, when communism took power in China.

Seeing this, Ms. Elias said she couldn’t help but relate it to her own experiences.

“They’re very deep,” she said. “It’s a beautiful message and some really powerful talent and song.”

Ms. Elias attended the performance with Tracy Denson, who is also in the music industry. “It makes you realize how deep the culture is, and their beliefs,” Ms. Denson said.

The two found it saddening that Shen Yun could not be seen in China, but hopeful because the company toured the world, sharing this authentic culture.

The performance included two vocal soloists, who performed with the traditional bel canto technique. Ms. Elias was astounded by their voices and said she could tell how much they enjoyed performing, sharing their art and culture.

“Very, very good. It’s so different from anything I’ve seen before. As appreciators of music, I’m so glad we were able to come,” Ms. Elias said.