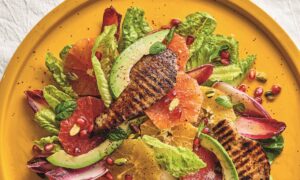 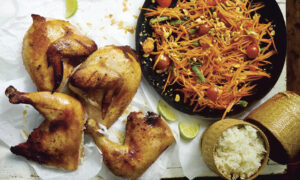 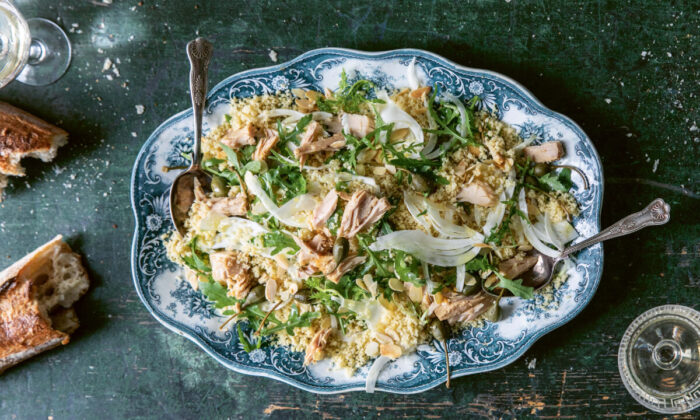 If you were being pedantic, you would cook couscous in a couscoussière, a Moroccan clay pot in which you slowly steam the grains over a bubbling stew. The way I do it is rather less romantic and utterly inauthentic, but it’s quick and convenient without compromising either on the flavor or the delightful fluffy texture of the cooked grains.

You could of course serve couscous plain, dressed with a little oil and lemon juice, even a smattering of aromatic spice—cinnamon, nutmeg, and so forth—to go with pretty much anything. But, inspired by the way they cook it in Sicily, I throw in salty caper berries, a good tin of oily, almost meaty tuna, and sweet aniseedy fennel. This makes for a vibrant centerpiece more than substantial enough to serve on its own.

Hands-off time: 15 minutes, for the couscous to swell

Pour the couscous into a large heatproof bowl. Dissolve the stock cube in the measured boiling water, then pour the boiling stock over the grains, cover, and set aside for 10–15 minutes to swell up.

When all the liquid has been absorbed, use a fork to fluff up the grains, then douse generously with one-third of the oil. Now add the almonds, caper berries, and fennel and toss everything together well.

Add the tuna, breaking it up with a fork and mixing it through the salad. This will happily keep for a day in the fridge.

Lastly, throw in the arugula (if it sits in the dressing, it will wilt). Squeeze in the juice of the lemon and dress with what’s left of the oil. Toss again and add salt and pepper to taste.

This is perfect picnic food alongside some good hard cheese, cold ham or salami, and a loaf of bread; I favor damper bread, wrapped neatly in a clean tea towel and served with lots of salty butter. I don’t think you’d want for much more.

Strawberries with a pot of clotted cream and a good solid picnic cake such as pistachio butter cake with marzipan icing… but on this occasion leave it un-iced; instead, just dust it with icing sugar.

Recipe reprinted from “A Table for Friends” by arrangement with Bloomsbury Publishing. Copyright 2020, Skye McAlpine.