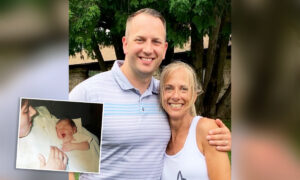 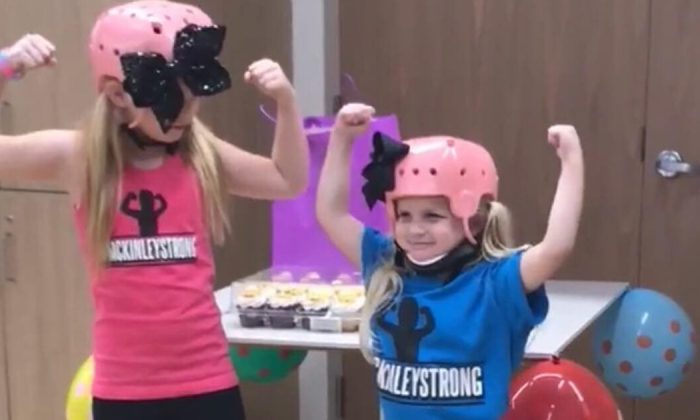 The bond between siblings is one of the most powerful forces in the world. Miley and McKinley Blue know this fact well, as it was through their connection that McKinley overcame overwhelming odds.

On May 11, the then 4-year-old McKinley was traveling in the backseat of her grandmother’s car through the streets of Omaha, Nebraska, while Miley, 10, was at school and her mom, Jessica Blue, was at work.

She was in her booster seat with her seatbelt on correctly, but even that was not enough to stop the devastating damage that would befall her.

A man came up to them in a Dodge Ram and rear-ended their car at a high rate of speed. McKinley was crying and clearly hurt, but at that point, it was unclear just how bad the injury was.

“My mom had called me, obviously in hysterics. I was told by a gentleman who took my mom’s phone that [McKinley was] crying, she’s moving, she’s okay. So I went to the scene as quickly as I could,” Jessica told The Epoch Times.

When Jessica arrived at the scene, McKinley was still crying. Her mother reassured her, telling her “Mommy’s here. It’s going to be okay, baby.”

It wasn’t long before the ambulance arrived.

McKinley was taken to Children’s Hospital where they assessed her with the highest level of trauma—she had brain damage from the blood coming out of her left ear.

Neurosurgeons told Jessica that the girl needed surgery right away. They performed a craniectomy, removing a large portion of McKinley’s skull—which was placed into her stomach region.

They then put McKinley into a medically-induced coma for a few days. From there, McKinley was gradually weaned off of medication as she became more alert.

Finally, on May 30, the child was taken to Madonna Rehabilitation Hospital where she really started coming into herself again.

Throughout all the different hospitals and stages of McKinley’s recovery, one force remained constant: her sister.

The portion of McKinley’s brain that was damaged in the accident was the most-used section. It affects balance and memory—she had to learn a number of skills again, including some as basic as speech.

By the time McKinley got to Madonna, she had already relearned a lot of basic language, but some words just didn’t come. The therapists told Jessica that fine motor skills, and some speech and eye movements, would be the last things to come back.

That part turned out to be true, but a lot of McKinley’s recovery was inconsistent. There were things that returned almost instantly, while others took a long time to develop, with little rhyme or reason behind any of it.

“From everything I’ve been told from the doctors, there is no medical explanation for McKinley’s recovery,” Jessica said.

Jessica admitted that there were definitely times where McKinley’s recovery would frustrate her, but she knew focusing on the negative wasn’t going to help her daughters through this time.

“It was really important for me to be that example to Miley and McKinley and to be that strong person for myself,” said Jessica. “[I was] keeping my mind positive and rejoicing in the things we could celebrate …  because that was going to be the example for the girls and keep myself from negative thinking.”

Perhaps what aided McKinley the most during her recovery was that Miley stayed home from school the entire first week after the accident to stick by her side.

“I have made sure that McKinley has felt comfortable doing all the stuff and also feeling great about her doing it: being next to her as she’s doing it, helping her go through it,” Miley told The Epoch Times.

Seeing Miley beside her was a huge motivation in getting better.

“She was bound and determined to make sure she could achieve and could always show me ‘Yeah, Miley can do that but look at me, so can I,'” Jessica told The Epoch Times.

Slowly but surely, McKinley relearned all of the skills she had prior to the accident. On July 11, one day before her fifth birthday, the child was released from the hospital—but not before the hospital staff got a chance to throw a birthday party for her.

McKinley’s room was full of balloons. Staff members sang to her, and she received an award and a set of baby dolls to take home. Miley got a present too—for being such a supportive sister.

“[It was] definitely a birthday that we won’t forget ever,” said Jessica.

Now the Blue family are resting at home, although McKinley’s recovery isn’t completely over yet. The relocated piece of her skull has yet to be put back atop her head, so she’s been wearing the same pink helmet since the beginning of her recuperation.

On August 10 the girl is scheduled to finally have her skull replaced.

School starts just a few days later, and while Jessica’s not sure about her kids going back right away, she doesn’t want to hold them from school for too long.

For now though, the Blues are enjoying their time back home and all of the love and support that the community has shown them. Jessica wanted to commend the medical staff and first responders at the scene of the accident in particular.

“Not only did this help but also everybody has gotten to experience this miracle in this wonderful story with Miley and McKinley that is so sweet and it touches everybody’s hearts,” she said. “A miracle has happened in front of everybody’s eyes.”

This story was originally published on Humanity.