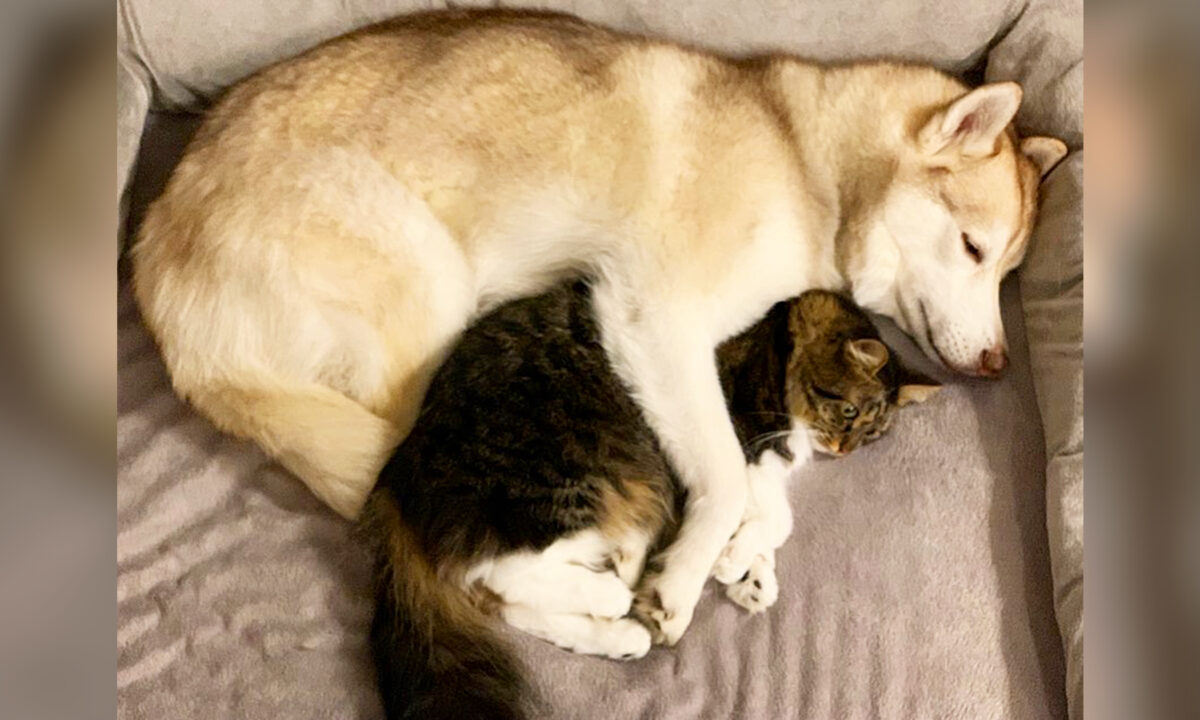 (Courtesy of Lilo the Husky)
Animals

Siberian Husky Helps Kitten on the Brink of Death, Now They’ve Got an Incredibly Special Bond

A Siberian husky and kitten in San Jose have formed an incredibly special bond ever since they met almost seven years ago. Their relationship has evolved from that of mother/daughter to best of friends.

Rosie, a long-hair, mixed-breed kitty, was only 2 1/2 weeks old when she was found sick and malnourished on the streets of San Jose by Thi Bui, co-founder of nonprofit kitten rescue Mini Cat Town. Witnessing the feline in such a deplorable condition, close to their adoption center, Thi rescued her from the streets and began to care for her.

“She almost did not make it through the first night even with round-the-clock care. Our cute kitten was lethargic and limp,” wrote lilothehusky on Instagram, according to Bored Panda.

At that time, Thi decided to introduce Rosie to their Siberian husky Lilo, and allowed them to cuddle extensively. Fortunately, Rosie started suckling on Lilo, and the latter took on the role of a mother.

Since their introduction, Lilo, who’s headstrong, has been very interested in getting to know Rosie.

“After they were put together, Lilo was very attentive, would lick her to clean her after meals, and even let Rosie nurse on her, even though there was no milk,” Thi told The Epoch Times.

After a few weeks of receiving tender care and love, Rosie recovered and she was then strapped on a harness to take her first walk with the dogs. A few months later, seeing her inseparable bond with Lilo, Thi decided to adopt her.

“It would have been cruel to separate the love they had for each other, ” Thi said. “I believe it was June 2015 (on National French Fry Day) that we officially announced her adoption.”

Over the last few years, Rosie’s personality has grown. The 7-year-old sassy, inquisitive, and intelligent kitty, according to Thi, will let you know when she doesn’t like something, with a warning bite or a swipe of her paw.

“She also doesn’t like to be left behind, and will vocalize her discontent if we leave her at home,” Thi said.

As to Lilo, now 9, and Rosie, now 7, they are their own little clique and don’t interact with any other animals in the house, Thi explained.

“They love napping together, playing, going on road trips, and enjoying outdoor adventures together, such as hiking, kayaking, paddleboarding, road-tripping, and hanging their heads out the window during car rides,” Thi said.

The professional kitty cuddler also shares Lilo and Rosie’s precious and unlikely friendship, along with their daily adventures, on Instagram. She believes that their bond has the power to change a lot of lives.