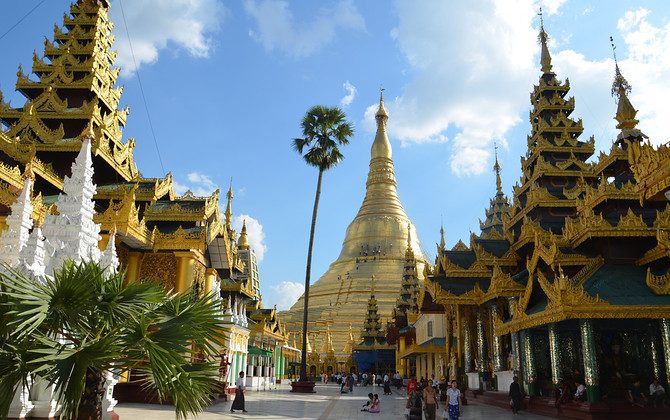 Visitors to Europe would be familiar with the phenomenon of being cathedralled out. This is when you visit lots of cathedrals in a short space of time, to the point that you tire of even the grandest of cathedrals. The same happens with the temples of Asia. To be templed out. Having spent much time in Thailand I have experienced a dose of wat fatigue myself. In the mysterious land of Myanmar there is a temple that will awaken anyone from the deepest of temple fatigue. Introducing the Shwedagon Pagoda in Yangon.

The first hint for me that this is not your every day temple was while looking out the window flying into Yangon. There was a brown haze firmly stuck over the city, yet the golden stupa shone brilliantly in the morning light.

The Pagoda is a few kilometres (or miles, as they still use here) outside the city centre and it dominates the skyline. As I walked closer I realised that what I was seeing is one of the great temples of Asia; up there with Angkor Wat and Borobudur.

How old is the Shwedagon Pagoda?

The original temple is believed to have over 2500 years old. It was built to enshrine eight of the Buddha’s hairs, which were given to two merchant brothers by the Lord Buddha himself. Over the years the shrine was added on, destroyed by earthquakes and wars, and rebuilt and improved. Like the Ship of Theseus, there has been so many replacement parts over the years that what you see today is not original.

At over 2500 years old the Shwedagon Pagoda is the oldest Buddhist temple in the world. Yes, even older than the Mahabodhi Temple in Bodhgaya, India, where the Buddha attained enlightenment.

How much gold is at the Shwedagon Pagoda?

Another question that doesn’t come with a straight answer. Trying to find out how much gold is here is an exercise in futility. An online search will give you answers from 9 to 60 tonnes, and that number is constantly changing. There is always worshippers applying gold leaf to something, and in the case when I was there, workmen adding another layer of gold to the Zedi.

Inside the Temple Complex

I easily spent a few hours wandering around the little temples within the complex. It is best to come in the late afternoon to avoid the fierce heat and to see the temple as the sun is settting.

So there it is, one of the great temples of the world. While I have been shaken from my temple fatigue, I pity the poor temple I visit next. This is a hard act to follow.

Speaking of Bodhgaya, within the temple complex there is a banyan tree that is descended from the Mahabodhi Temple, the same tree that the Buddha sat under.