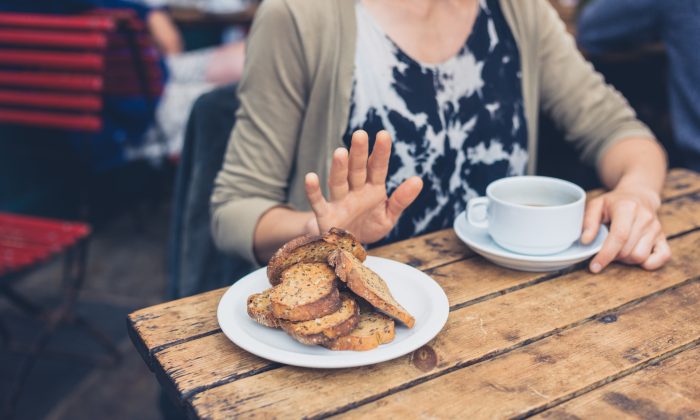 Should We Be Worried About Gluten?

Should everyone be concerned about consuming gluten? Gluten-free, like fat-free and low-carb, is a dietary fad that claims to promote weight loss and enhance health. But are there real health benefits to going gluten-free?

Gluten is a generic name for the primary protein found in wheat and grains related to wheat. It makes up about 70 percent or more of the total protein content in wheat. Gluten is an important component in the grains that are used for baking because it provides elasticity and chewiness in bread and helps dough rise by trapping the carbon dioxide produced by yeast.

According to the USDA, about 17 percent of calories in the American diet come from wheat flour.

Gluten is ubiquitous in the American diet, since processed foods like pasta, bread, baked goods, and meat substitutes are typically made with wheat. According to the USDA, about 17 percent of calories in the American diet come from wheat flour—a large proportion of the diet to come from a single food. Gluten is also found in many other grains like farro, freekah, bulgur, spelt, kamut, barley, rye, and triticale.

When Is it Necessary to Go Gluten-Free?

For years, wheat has been blamed for being a cause of obesity, dementia, and poor health. But there are only three kinds of health conditions currently known to be gluten-related: the autoimmune condition known as celiac disease, non-celiac gluten sensitivity, and allergies to wheat.

For people who have celiac disease, eating gluten causes the body to launch an autoimmune attack on the small intestine. This can lead to chronic inflammation and serious health problems throughout the body, not just in the digestive tract. A 2014 study called “U.S. Perspective on Gluten-Related Diseases” by the Center for Celiac Research estimated that about 1 percent of the population has celiac disease and another 1 percent of the population has a wheat allergy.

Overall, it is estimated that three to six percent of the population are sensitive to gluten.

Overall, the 2014 study estimated that 3 to 6 percent of the population are sensitive to gluten. This includes irritable bowel syndrome and some autoimmune diseases that are sometimes aggravated by gluten consumption.

Does Gluten Cause Weight Gain?

Wheat has been called the main cause of the nation’s obesity epidemic in diet books, and losing weight seems to be a motivator in the trend of those seeking a gluten-free diet.

Yet there have been no studies published that show removing gluten from the diet results in weight loss. Furthermore, there is also no evidence that intact wheat berries (unground wheat kernels), which contain gluten yet are a whole, unprocessed food, have any negative effect on health in people who do not need to avoid gluten.

Books and websites offering diet advice often attribute negative reactions from eating high-glycemic, refined carbohydrates (like products made from white flour and very finely ground whole-wheat flour) to their gluten or wheat content. It is the process of refining foods, and the subsequent glycemic effects from eating those foods, that is unhealthful and promotes chronic disease, rather than the type of grain or even gluten in particular. Turning to other refined carbohydrates, such as white rice flour, isn’t an improvement.

It is the process of refining foods, and the subsequent glycemic effects upon eating those foods, that is unhealthful and promotes chronic disease, rather than the type of grain or even gluten in particular.

A gluten-free diet can be just as high in calories and low in nutritional value as the standard American diet. Foods made from refined flours, like gluten-free pasta, cookies, and bread, will not help you lose weight. These products are just as harmful as refined wheat flour.

However, if you replace gluten-containing pastas and baked goods in your diet with foods like vegetables, beans, fruit, nuts, and seeds, you would most likely lose weight (and be healthier), because these foods are naturally low-glycemic and high in fiber and nutrients.

Of course, eating an abundance of refined flour products does promote weight gain and poor health, regardless of whether these are made with wheat or other grains. However, intact whole grains can be part of a health-supporting diet, and beans and other legumes are the healthiest carbohydrate-rich food.

Although there is no scientific evidence that people without gluten sensitivity or celiac disease would be harmed by gluten, there is also no nutritional requirement for grains, either.

The Bottom Line on Gluten

The bottom line on gluten for most people is that it is not a problem. Many advocates of gluten-free eating programs have supplied scientific references showing the link between wheat and disease, by using studies on products made with white flour and incorrectly blaming the health problems resulting from processed products on the gluten they contain. This is not scientifically accurate.

Within the context of an optimal, nutrient-dense, plant-rich diet, eating healthful gluten-containing foods, such as wheat berries cooked in water, or coarsely ground or sprouted whole-wheat bread, will not negatively affect your health. This diet relies heavily on beans as a starch source and includes a variety of starchy vegetables like peas, squash, and root vegetables.

When grains are included in the diet, it is best for these to be whole grains cooked in water. Water-cooked whole grains are healthier than whole-wheat breads or other flour products, because more nutrients are retained, the glycemic load is lower, and cooking in water does not form toxic compounds that are generated when food is browned.

Dr. Joel Fuhrman is a board-certified family physician with over 25 years of experience in nutritional medicine. He is president of the Nutritional Research Foundation and a frequent guest on “The Dr. Oz Show,” for which he serves on the medical advisory board. Visit DrFuhrman.com. Read the original article here.