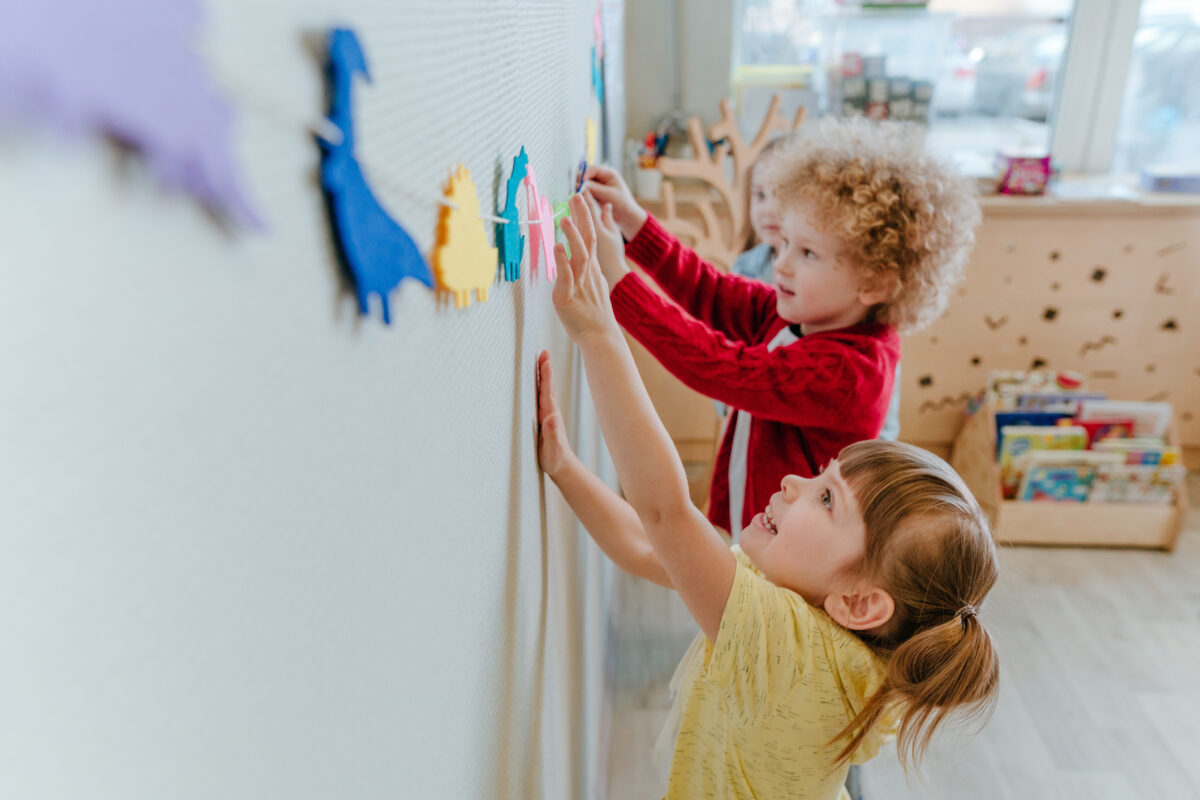 The year of development between the average 5-year-old and the average 6-year-old can make all the difference in attention span, patience, and the ability to learn in a formal didactic setting. (lithiumcloud/Getty Images)
Family & Education

I launched my medical practice in Montgomery County, Maryland, in March 1990. Because I’m both a medical doctor and a doctoral psychologist, my practice soon attracted parents who had concerns about how their kids were doing in school. Beginning in the mid-to-late 1990s, I began to notice a growing cohort of young boys who weren’t doing well in the classroom, who said they hated school, beginning in kindergarten. Parents were asking me why their sons hated school so much. As I learned more about each boy’s situation, I was surprised to find that our local public school kindergarten was now requiring children to learn to read and write.

I was surprised because when I was a little boy in kindergarten in Shaker Heights, Ohio, in the 1960s, we weren’t taught to read and write at all. We played duck, duck, goose. We sang in rounds. We did lots of arts and crafts. We went on field trips to the Shaker Lakes, where I splashed in ponds with my friends as we chased after tadpoles. By the end of kindergarten, I couldn’t read a word. I couldn’t spell my name. Neither could most of the other kids. Nobody expected us to—kindergarten wasn’t about learning to read and write. It was primarily experiential: singing, playing tag, doing arts and crafts, and splashing in ponds.

That’s why it surprised me in the late 1990s to learn that our local kindergarten was now all about learning to read and write. “What are they thinking? Don’t they know that boys that age aren’t ready to sit for an hour and learn about diphthongs?” I wondered. But as I researched the topic, reaching out to colleagues regionally and then nationwide, I learned that this trend was sweeping the country. By 2010, researchers found, the trend was pretty much complete. As late as 1998, only about 30 percent of kindergarten teachers expected their students to be able to read by the end of the school year. By 2010, 80 percent of teachers expected their students to be able to read. Kindergarten had become first grade.

I recall the honors ceremony at my public high school in 1976. Almost every student whose name was called was a boy. The winner of the poetry prize was a boy. The editor of the student newspaper was a boy. The valedictorian and the salutatorian were both boys. Sadly, there were very few girls who won any academic awards. Today, my high school still has an honors ceremony, but now almost all the awardees are girls. Nationwide, 70 percent of high school valedictorians now are female. Women now outnumber men at four-year colleges in the United States by 59 to 41, and women are now substantially more likely than their brothers to graduate from a four-year college. We all applaud the rise of girls in school and at university, but why didn’t we level off at around 50-50? Why are boys now greatly under-represented among university students?

I became convinced that the acceleration of the early elementary curriculum, beginning in kindergarten, was part of the problem. So in 2001, I wrote a paper for the American Psychological Association entitled “Reclaiming Kindergarten: Making Kindergarten Less Harmful to Boys.” I began the paper by noting, correctly, that many U.S. kindergartens as of 2001 were now deploying the traditional first-grade curriculum, with a focus on reading and writing. In view of the research (which has since been updated) showing that boys lag substantially behind girls in brain development, I advised that boys start kindergarten at 6 years of age, while girls continue to start at age 5.

When I met with school leaders to promote the idea, I cited the work of Deborah Stipek, the longtime dean of education at Stanford. Stipek has shown that kids develop attitudes toward school very early, by the end of the kindergarten year. And those attitudes, once formed, are global, stable, and noncontingent. That means that the boy who decides at the end of the kindergarten year that he hates school is likely still to hate school years down the road.

Richard Reeves, a senior fellow at the Brookings Institution, recently published his book “Of Boys and Men: Why the Modern Male Is Struggling, Why It Matters, and What to Do About It,” in which he reviews the avalanche of literature showing that boys are now doing much worse than girls at school and in college. One of his principal recommendations is that boys should start kindergarten one year later than girls. But Reeves asserts that “the main reason for starting boys later is not so that they will be a year older in kindergarten. It is so they will be a year older when they get to middle school and high school.” Such a statement not only undermines the argument for starting boys earlier; it overlooks the importance of the early years in child development. (Reeves was gracious enough to mention, in his recent Substack, that I made the same recommendation 21 years earlier.)

Should you start your son in kindergarten at age 6 rather than age 5? What about your daughter? My own views have evolved over the past two decades. I’ve now visited more than 460 schools over the past 21 years, and I’ve learned that girls aren’t the winners here. The average 5-year-old girl is better able than the average 5-year-old boy to sit still, be quiet, and pay attention for a 40-minute session on phonics. But that doesn’t mean it’s best practice for that girl to be subjected to such lessons. On the contrary, I’ve seen firsthand how the acceleration of the early elementary curriculum has resulted in girls who develop an instrumental attitude toward school: They work hard not because they love the content, but to please their parents or to please the teacher. The end result, for some, is girls who are burned out by the time they reach fifth grade. Sometimes, sooner than that.

There’s growing evidence that the acceleration of the early curriculum, beginning with pre-K and kindergarten, is harmful to both girls and boys. Kids in Tennessee who won the lottery to attend an academic prekindergarten are actually doing worse years later, in sixth grade, compared to kids who didn’t attend. When kids are drilled on academics at 4 and 5 years of age, they lose their enthusiasm for learning. Early childhood educator Erika Christakis, reviewing the evidence in The Atlantic, concluded that the “same educational policies that are pushing academic goals down to ever earlier levels seem to be contributing to … the fact that young children are gaining fewer skills, not more.”

So what should you do, if you have a 4-year-old and kindergarten is just around the corner? Ideally, you will want to find a play-based, mostly outdoor kindergarten program, where the focus is on experiential learning across all domains rather than a narrow focus on learning to read and write. Many Waldorf and Montessori schools offer such options. But if no such option is available to you, then I recommend that you give your child the gift of an extra year of childhood and postpone enrolling your child in the modern academic “kindergarten” until she or he is 6 years old. (My wife and I started our own daughter in kindergarten at age 6. She is now 16, and all three of us are glad we made the choice we did.)

There’s a huge difference between the average 5-year-old and the average 6-year-old in attention span, patience, and ability to learn in a formal didactic setting. If most schools now insist on teaching the traditional first-grade curriculum to kindergartners, then parents would be well-advised to enroll their children in “kindergarten” at the age when students traditionally enrolled in first grade.

Fifty years ago, boys generally did better in school than girls. There are many reasons driving boys’ decline over the past five decades. In my book “Boys Adrift: The Five Factors Driving the Growing Epidemic of Unmotivated Boys and Underachieving Young Men,” I make the case, for example, that video games have shifted motivation for many boys away from the classroom to the video game console. As a family doctor, I see firsthand many boys who are more concerned about being the first in their group to complete all the missions in the latest release of “Call of Duty” rather than studying for an exam.

In addition, I argue that the collapse in our social construction of masculinity has had a toxic effect. A generation ago, boys were inspired by the heroes in movies with stars like Gary Cooper, Paul Newman, and Sydney Poitier—actors who portrayed actual men overcoming real-life challenges. Today’s movie blockbusters feature cartoon figures, such as Marvel comics characters, who are caricatures of masculinity. Despite their best intentions, boys living in the real world can’t deploy superpowers or jump between universes.

But putting those other factors aside, I believe that one reason boys used to do well is that their first experience of school was more often positive than negative because the kindergarten of that era was actually a fun time of interactive play, not an academic boot camp. For boys to catch up to girls today, the first requirement is that boys begin school with a better experience. I still believe that starting “kindergarten” at age 6 rather than age 5—for everybody—might be the right first step.

Dr. Leonard Sax is a practicing family physician and the author of four books for parents, including “Boys Adrift: the Five Factors Driving the Growing Epidemic of Unmotivated Boys and Underachieving Young Men.”

This article was originally published on the Institute for Family Studies blog.