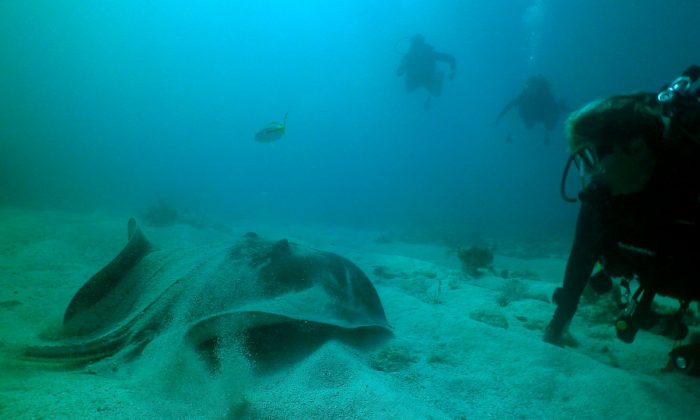 Shipwreck Diving and Star Gazing in the Genuine Florida Keys

An overseas highway, U.S. 1, island hops in the Florida Keys. I followed it and found the Florida of my childhood.

I lay back in a hammock and watched the stars in the cloudless, tropical sky. A cool breeze blew in from the Atlantic Ocean. Waves slapped against coquina rocks. I thought of how I used to swim, snorkel, dive, and walk the beaches looking for treasures. The rarest treasures of all were the hand-blown Portuguese glass fishing net floats. Those are no more.

We live in the age of plastic—plastic floats, plastic dive instructors, plastic experiences but mimicking the genuine traditions.

But in Islamorada in the Keys I found again real people content to live the island life they had enjoyed since childhood. Their special gift is making it available to others.

In Islamorada in the Keys I found again real people content to live the island life they had enjoyed since childhood. Their special gift is making it available to others.

“I grew up here in Islamorada,” said George Cabrera, owner of Peacock Cottages. “We used to play baseball on U.S. 1. We could play for five hours without seeing a car. Now you can’t cross the road.”

Cabrera and his mother bought cottages on the beach long ago. His mother is now 83, but still maintains Peacock Cottages. They are simple, efficient apartments on a large piece of land fronting the ocean. A long pier juts out, a protective cove shelters small boats if guests bring their own.

A hammock on their beach between tall coconut palms was perfect after a day of diving. It’s far enough from the highway the noise doesn’t intrude. It’s far enough away from the main tourist thoroughfares to offer privacy and a homey comfort.

Islamorada runs along 18 miles of some of the most scenic Atlantic Ocean and Gulf of Mexico waters anywhere. It is among a chain of islands some refer to as the “Middle Keys,” about 20 miles south of Key Largo.

What to Do on a Short Stay in Orlando

I finally roused myself from the hammock and walked into the two-bedroom cottage, along its old wood parquet floors. While the cottages have a touch of classic decor, they are fully modernized—featuring a stainless steel refrigerator, flat-screen TVs in every room, and luxuriously comfortable beds.

It’s a great retreat for families, dive clubs, or fisherman and boaters who want their own private docks. It features a small sitting pool, large patio, barbeque grills, kayaks, and paddleboards.

Diving starts early in the Keys. To avoid the gridlock on U.S. 1, I took a service road that parallels U.S. 1. I got to the Tavemier Creek Marina early, to meet Gary and Brenda Mace, owners of Conch Republic Divers.

She described the varying depths she takes divers to, depending on their level of experience. “Then there’s the heavy metal,” she said, with a laugh. She meant shipwrecks. We were going to dive to the Eagle, a 287-foot-long cargo ship sunk off the Lower Matecumbe Key in 1985.

“We don’t normally go there unless we have advanced wreck divers or rebreather divers,” she said.

I was on the stern section of the Eagle, at about 80 feet below. The hull had modest marine growth. A goliath grouper darted away off the stern into deeper water as divers descended on the wreck.

The Eagle was broken apart by hurricane Georges and lies on its starboard side. It’s cable winches, masts, and superstructure were impressive, teeming with ocean creatures. A curious-seeming sea turtle swam near us.

There’s no telling what will come near, attracted by the shipwreck. Divers have seen a great white shark and some have spotted dolphins at the safety stop.

Our second dive was at Alligator Reef, about 20 to 35 feet below, one of the area’s most famous dive sites. We had an hour, in which we explored huge coral heads that were literally underwater islands.

With fishing forbidden in the sanctuary, the many black lobsters and other sea life have little fear of divers and will get close.

I dined at the historic site, Cheeka Lodge. The founding families of Islamorada, Pinders and Russels, are buried in the cemetery there, my server Ben Wieland told me. Many of them were killed in a hurricane in 1935.

I ordered a jumbo shrimp cocktail, though I was tantalized by many other seafood options. This is one restaurant that says jumbo and means it. It was a good feast after an active day.

The following day, when I met up with Mike Goldberg, owner of Key Dives, for my next dive, I was regaled with a lively account of Goldberg’s experiences diving the Eagle and Alligator Reef: “The other day on the Eagle there was a pair of hawksbill turtles munching on a sponge just a little more than a foot from me. I looked up and a 10-foot bull shark was watching the action.

“I got into a school of grunts,” he continued. “The school was so big it would have filled a 1,500-square-foot room from edge to edge. We’ve seen hammerheads on Alligator Reef this year and a whale shark on the Duane.”

His enthusiasm is contagious. Even the cold water couldn’t quelch it. Actually, with a hood on my wetsuit for winter diving, it’s not bad. But I did luxuriate under the hot water showers aboard the ship after my dive.

The History of Diving Museum is worth a visit. I’m apparently antique enough myself to still be using some of the artifacts they have on display. I saw the same dive knife I strap on my leg displayed at the museum with a price tag of $270. Give it time, one day your stuff will be antique too.

I returned to Peacock Cottages, hung my wet gear up so it would dry for the next day, grabbed my mask, fins, and snorkel, and walked down to the small beach. The water was chilly. I went in and looked around small coral rocks and watched juvenile tropicals duck into nooks and crannies.

I dried myself in the warm, late-afternoon sun, lounging in the hammock. I rocked gently back and forth until I dozed off. It is comfortable, old Florida. A place to take time to relax. Put your feet up, and enjoy quiet moments.

John Christopher Fine has authored 25 books, including award-winning books dealing with ocean pollution. He also writes for major magazines and newspapers in the United States and Europe. He is a master scuba instructor and instructor trainer and expert in maritime affairs.