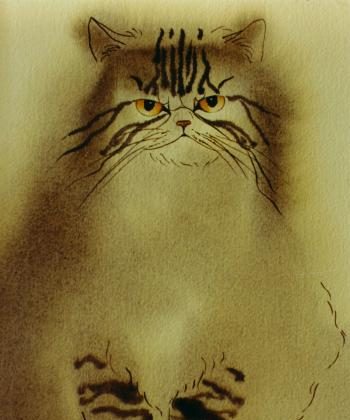 By Cheryl Casati
biggersmaller
Print
TUCSON, AZ—I happened to be visiting an art gallery a few days ago and was drawn to the paintings of wildlife. I recognized the unique style of a painter I had met several years ago but never contacted, so this time I called!

When I stepped out of my car at Sherry Bryant's home, the very first thing I noticed was the absolute silence and peace of the area she lives in. There is a stillness that is deep and mystical. Sherry said when she moved into the home her new neighbors said, "Welcome to the silence."

She is a warm vibrant woman, much like her art work, which exudes life and warmth. Her baby book notes that as early as two-years-old Sherry loved to draw, and her pictures were always of horses. She received her first easel at six-years-old, and since then she has studied and painted animals, both real and mythological. She is a self taught artist, the basis of her knowledge coming from her own research, experience, and practice, practice, practice.

"I'm very drawn to animals; of course, and Chinese and Japanese paintings have been an inspiration for me. I like the texture, spontaneity, the simplicity and elegance of design. I combine these elements in my own work," she says.

Sherry also points out, "I paint to express the inner being of the animal." She has studied both animal and human anatomy in depth.

Another influence for Sherry is Albrecht Durer, a well known artist of the late Gothic to Renaissance era in Germany.

As I looked at her work, I understood I was having "an experience" of the paintings rather than just looking at artwork.  Walking through her home and studio, I was dazzled by the incredible uniqueness and stunning detail in her paintings. They vibrate with life.

Sherry explains, "I want to appeal not only to the eye but also to the soul—I am genuinely after a profundity of the feeling."

Her current work is mostly watercolors. "Watercolors provide more freedom of expression. I do several layers to each painting: first I wet the watercolor paper and then brush on a layer of paint. I allow the paint to dry then wet it again. Then I apply another layer of paint. I repeat this process, sometimes as many as 15 times. It provides a unique luminosity to the painting."

"I also am working with diluted acrylics… which have a very thin consistency, and I layer them on the canvas like watercolors." Sherry recently experimented with adding a few strands (10 -15 strands) of actual horse hair in the mane of one of her horse paintings. The result of the horse hair with the painting technique provides new light and movement to an already lovely painting.

Sherry's newest series is called "Spirit Animals of the Southwest". "Each painting has a story behind it," she says. For instance, the story of Sherry's award-winning painting of the stallion she calls "Antonio" happened in Death Valley, California.

"My friend Allen and I were visiting the flatlands area and out of nowhere a black stallion appeared," she recalls. "He reared up, struck the air with his front legs, rolled his eyes, pushed out his chest, snorted, then disappeared like a phantom." Sherry's painting of Antonio was entered into an international contest for equine artists, and it was one of the few chosen to appear in the new coffee table art book, "Ex Arte Equinus".

In Bryant's studio, I was surrounded by her work, and as we talked during the interview, my eyes would wander to the paintings. Sherry has said, "When I see a flicker in the eyes of my painting or feel the breath from its nostrils, I know it has taken on a life of its own. I see the creature from the inside out and take the viewer to dimensions beyond what is known. I'm more concerned with the spirit of the subject than its anatomical details. Although my work is about texture, transparency, fluidity and softness, it is also about a moment, a mood, an ephemeral feeling, and most of all, the animal's soul, its spirit, its divine being and nature's pure and primitive power."

Being around her work brings home the truth of her statement: these paintings are not quite like any others, they are all very enlivened. This feeling even extends to the one painting Sherry has in her studio that is not of an animal, but of Calla Lilies. As my eye touched this painting, it seemed to move subtly, to breathe.

Sherry Bryant produces art which is one-of-a-kind, and she is as unique and rich as her paintings. She has a deep connection to nature. As she said, "I was the kid who climbed trees, I climbed trees a lot!"

On her studio wall is a quote from Aristotle, "The aim of art is to not represent the outward appearance of things, but their inward significance." Sherry calls this her mantra.