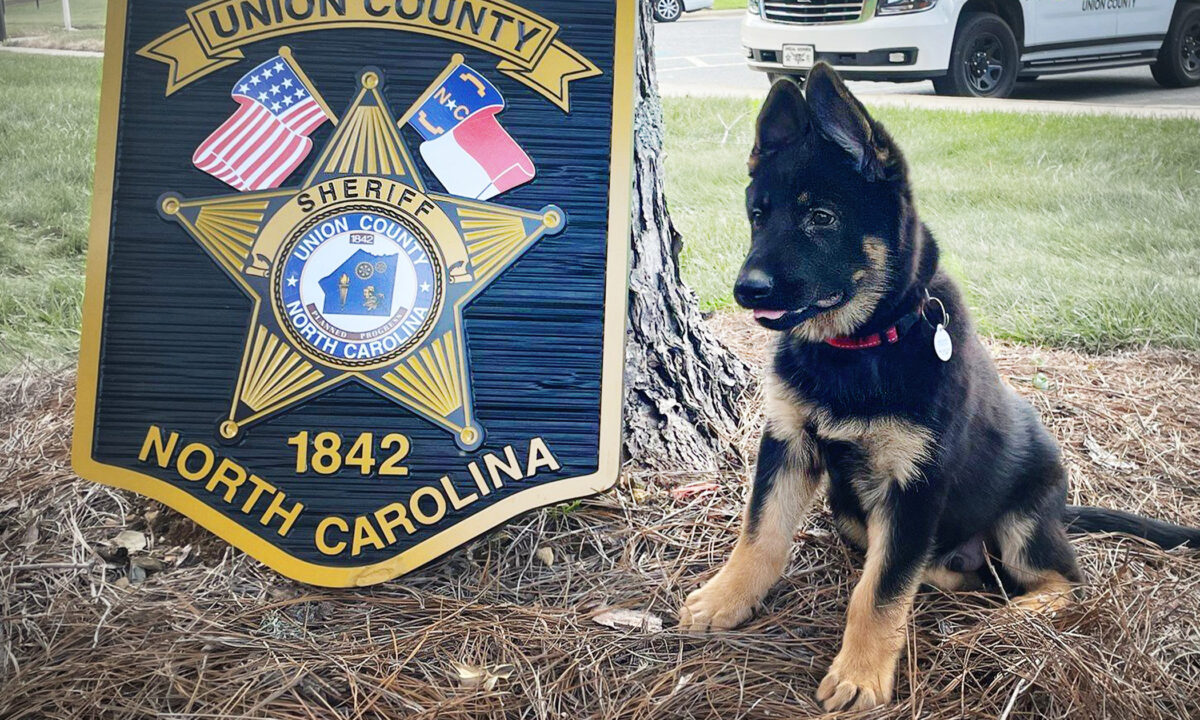 The Union County Sheriff’s Office was honored to announce its newest “employee,” an 11-week-old German shepherd—who currently has no name.

On Facebook last week, the officers called for the public to join in choosing a handle for the nameless pooch, temporarily dubbed “Puppy Doe.”

“After a considerable amount of internal time and effort, we cannot determine the best name for this furry fellow and we need your help!” the officers captioned on Facebook, while featuring some incredibly snugglable shots of the stout new officer pup.

They added, “Just to give everyone a heads up, ‘Sir Sitsalot’ and ‘Fluffy’ have been ruled out as potential names, we apologize for the inconvenience this may cause.”

To help the public hone in on a suitable moniker, they listed some of puppy’s notable (and sometimes naughtily adorable) traits, which include the following:

-Likes long walks in the park

-Enjoys rolling around in the grass while being told not to

-Prefers his toys be thrown overhand, not underhand (Your guess is a good as ours on this one)

Thousands of suggestions poured in, which the officers sifted through and narrowed down to nine top potential names:

1. Logan: In in honor of a local young man who is on the autism spectrum and has dedicated his life to the care and well-being of all little creatures—especially dogs.

2. Union: In honor of our very own beautiful Union County, North Carolina, which was founded in 1842.

3. Honor: recognizes the 158 law enforcement officers who have lost their lives in the line of duty up to this point in 2022.

4. Thor: This name signifies strength and is often associated with thunder in [Norse] mythology.

5. Kane: The name Kane is often associated with “warrior” or “tribute” in various languages. UCSO K-9s dedicate most of their lives to the service of our community and are called up to be warriors when needed.

6. Radar: A radar system is a vital tool utilized to monitor the locations of important people, places, and things during a variety of situations. UCSO K-9s must always be alert and up to date with their surroundings and any unpredictable situations that they may encounter.

7. Valor: Valor has been defined as “strength of mind or spirit that enables one to encounter danger with firmness.” UCSO K-9s display valor each day as they work to protect our deputies and our communities from harm.

8. Griff: This name honors UCSO Sgt. Brian Griffin whose dedication and discipline has been instrumental in building the UCSO K-9 program into the successful unit it is today.

9. Axel: Stands for “father of peace” in the Scandinavian language. This name also honors Navy SEAL Matthew Axleson who sacrificed his life in “Operation Red Wings” during the War in Afghanistan.

In short order, Puppy Doe will officially become the recipient of one of these fine, honorable names. Stay tuned to the Union County Sheriff’s Office Facebook Page to see what this young dog’s new designation will be.