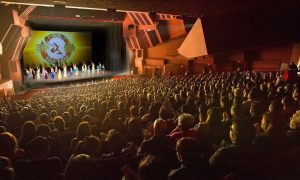 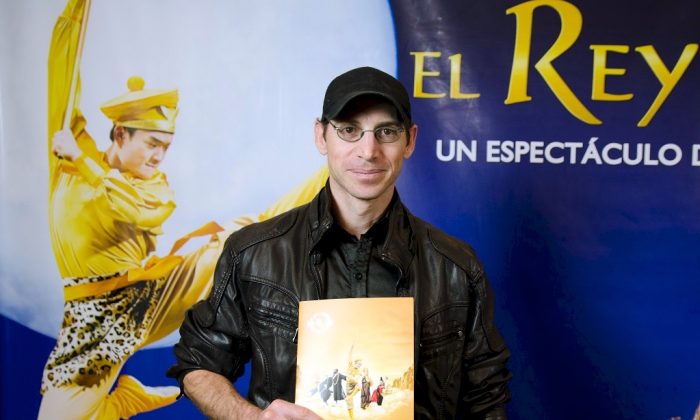 The performances in Buenos Aires were all well received, as were the performances in other stops of the tour which began on May 8, with stops in Mexico City, City of Medellín in Colombia, and Argentina’s San Miguel de Tucumán.

“The Monkey can be seen as representing the ‘monkey mind,’ a mind of unruly thoughts that need to be reined in. Yet despite the disciples’ shortcomings, each is offered forgiveness and redemption. And the ordeals they face—from conquering fear to resisting temptation—represent the trials and tribulations one must overcome along a spiritual path.”

Mr. Martinez said he could see this spirituality in the performance. He said he finds it hard to explain his experience with words, describing the performance as truly unique. “I tell you the truth, you can feel it in your heart,” he said.

“It awakened me … every part they did, it was real as if watching a movie. I could identify with each one of the dancers … it’s like being there … truly alive.”

Struggle Between Good and Evil

José Luis Pérez Sánchez-Cerro, Peru’s ambassador to Argentina, said the performance was superb, not only for its quality and artistic expression, but also for the message that it brings.

“I think it leaves you a background of teachings, that is, the struggle between good and evil, the struggle with evil in the world at all times,” he said.

Mr. Sánchez-Cerro, who has also been Peru’s ambassador to Germany, Spain, and Colombia, was a member of the U.N. Human Rights Committee, and was elected as the vice president of the committee for 2009-2010.

Watching the performance, Mr. Sánchez-Cerro said, he could see a message that this world isn’t just about pursuit of material things, that there is a spiritual side, and that man is capable of protecting that spirituality.

“I believe the biggest teaching is the perseverance of and the persistence in doing things well, and that is what we have learned tonight,” he said.

“It is a spectacle that shows life with its ups and downs, and at the end it is through the perseverance in life that good triumphs over evil.”

Actress Maria Belen Francese said she was stunned by the synchronization of the dancers who perform classical Chinese dance. She was also impressed by the beautiful costumes.

“I liked the visual aspect the most, so aesthetic and flawless in the detail of the movements. No movement was out of order, everything was so precise,” Ms. Francese said.

She also praised the spiritual aspect of the performance. Spirituality and belief in the divine was essential in ancient Chinese culture.

“The spiritual aspect is shown with the importance that it deserves … It’s a show that not only shows the beauty, the aesthetics, but also shows the [spiritual aspect], which is everlasting,” she said.

“I love it because it’s the real and true beauty … It’s amazing, from the aesthetic aspect to the message it gives.”

Immersed in the Performance

Rodrigo Gimenez, a TV and theater actor, said the moment the performance was over, he couldn’t help but give the artists a standing ovation.

“When it finished, the first thing that I felt was ‘wow,'” Mr. Gimenez said.

“I take my hat off, because it’s amazing.”

He said he tried to immerse himself in the performance, and enjoy it as much as possible.

“I gave myself in to the music, the colors, the good taste, the perfection, the textures, those fabrics, those faces. I’m very excited, I loved it.”

The performance, he said, was something that resonated with something deeper inside.

Alfredo Casero, also an actor, commented on one of the pieces that shows the persecution of practitioners of Falun Dafa, a spiritual meditation exercise, in modern day China under the communist regime.

That dance piece is “a beautiful and merciful show about something so horrific [persecution in modern China], but that imbues hope, that is, people struggling. And with a practice that has more to do with the five thousand years of China than the last 60 years of communist revolution.”

The Shen Yun performance has perfected beauty, according to Mr. Casero.

Hugo Correa, a reporter with CNN en Español, said he was moved by the performance.

“The first thing I felt is to be a kid again,” he said.

“It evoked a smile, and I can assure you, the stress we live with in Buenos Aires, a big metropolis like this, it disappeared automatically. It’s incredible, I’m fascinated with the show.”

Mr. Correa said he was highly impressed with the different elements of the performance, including the dance techniques, the synchronism between the dancers, and the animated digital backdrops and their interactions with the dancers on stage.

“The way they combine them is really admirable.”

He said a colleague and manager of his, who had just arrived from Hong Kong but couldn’t make it to the performance, recommended the performance to him, saying, “You will see a formidable show, and I’m so glad that it’s in Latin America.”

“I think it’s great we have this [performance in Latin America] because it allows us to connect with … another poetic way to see our world,” he said.