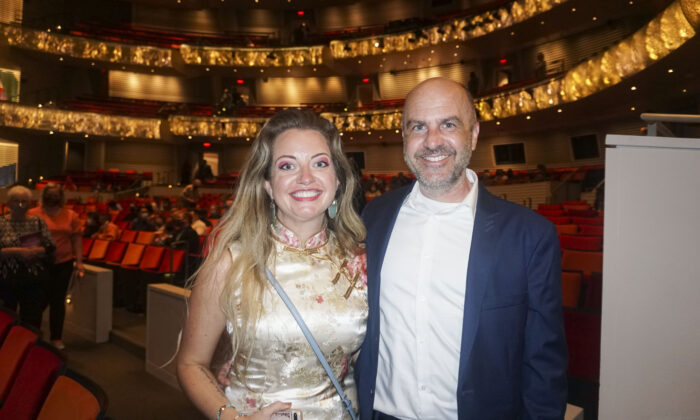 KANSAS CITY, Missouri—A wonderful combination of visuals, music, and storytelling is one of the many compliments that Shen Yun Performing Arts usually receives. Ivry Karamitros and Mark Murphy, who attended Shen Yun‘s Kansas City performance at the Kauffman Center for the Performing Arts on Oct. 9, were also impressed by the talent of Shen Yun’s artists.

For Karamitros, the Shen Yun Orchestra was a highlight of the performance. “I think everyone who’s playing is very talented. I think the music is very inspiring and pretty,” the international business developer said.

The Shen Yun Orchestra is built on a foundation of classical Western instruments, with traditional Chinese instruments such as the erhu and pipa used to give the music an authentically Chinese flavor.

“I like hearing all the different Chinese instruments,” Karamitros said. “It’s very different than a typical Western orchestra, so it’s nice hearing an orchestra with the Asian element to it.”

Karamitros said that many of the Chinese instruments in the orchestra and on stage, like the erhu and guzheng, were familiar to her, as she has spent some time living in China.

“My sister knows how to play the guzheng. I lived in China for a little while. It’s nice to see so many people who are able to play their instruments,” she said.

“They’re really good,” Karamitros said of the stories. “I would say that it’s nice to see a lot of the historical background to a lot of things. Seeing the Imperial Palace, I think, was really pretty with the dancers and the colors. I also liked the Plum Blossom [dance].”

New York-based Shen Yun’s dancers are trained in Classical Chinese Dance. Closely related to martial arts, the art form is highly expressive and can be used to portray an array of emotions.

“You can tell there’s a lot of training,” Karamitros said. “They all look like they work out a lot, and they really try very hard to work on their performances … I think that shows.”

Having been to China, Karamitros said Shen Yun‘s mission of reviving “China before communism” was important, and that people need to discern the very separate identities of China: China and the Chinese Communist Party.

“I think a lot of Chinese people, it’s important for them to know their history and to know the history of China—more than just their party and the Communist Party,” she said. “So I think that’s very valuable for a lot of people. I think it’s educational for American people to learn more about Chinese culture and the history of China in general because Chinese history is so long.”

“I think it’s great they’re sharing pieces of the culture that probably get a little overlooked with everything that’s happened since 1949,” Murphy added.

“They’re doing a great job … keep it up,” Karamitros said.

Reporting by Ya Wen and Maria Han.