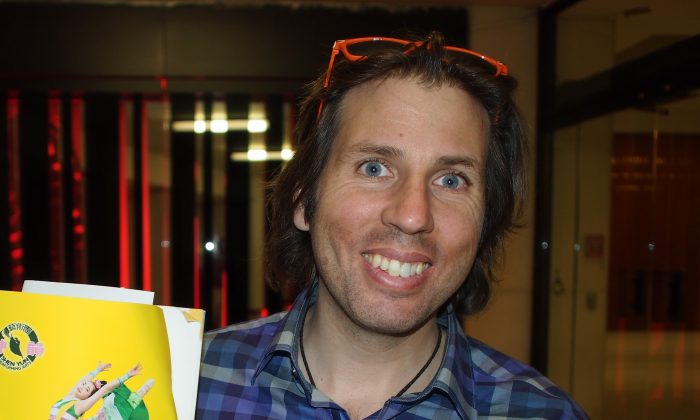 “It was memorable to see the movement of the divine—in the dance, in the expression, in the flow of energy expressed through the movements. It was truly beautiful,” he said.

“I opened my mind, without any particular emotions, but at one point I felt a certain joy grow in me, becoming stronger and stronger. It then swelled up to my throat, and I almost wanted to exclaim, ‘Yay!’ At the same time, I knew I had to keep quiet, so I just took my time to enjoy all I was seeing, to marvel at it.”

Mr. St. Arnault, a businessman working to build a global network of businesses to promote local products through his company Sunshine Synergie, is also owner of Entretien SunShine, a company focused on sustainable development.

His experience is not uncommon at Shen Yun’s performances. Other audience members that night spoke of being uplifted and witnessing a beauty beyond the ordinary.

Shen Yun was founded in 2006 with a mission of reviving the traditional culture of China, one with a long history of 5,000 years.

The company tours the globe every year with an all-new programming as a way to share with audiences the essence of the ancient civilization. China’s heart and soul can be seen in principles such as benevolence and justice, propriety and wisdom, and respect for the heavens—principles and ideals originating from Confucianism, Buddhism, and Taoism. These traditions have been forcibly repressed in China since the communist revolution.

“It’s peace, goodness, the joy of life, to see and believe in something. It’s important to believe in something bigger than ourselves, whether it’s expressed through spirituality or in everyday life—to give love to people, to offer friendship, to offer compassion to everyone. I find these to be beautiful acts and I believe this performance helps us understand this, and enjoy it as well,” said. Ms. Huot.

“It’s bringing me calm and tranquility.”

Tranquility was once a highly valued state in traditional China. A calm mind was seen as a prerequisite for spiritual enlightenment. This was one of the many spiritual tenets of China’s traditional beliefs permeated the society. Many audience members expressed a pleasure at discovering these principles on stage that evening.

The spirituality was very much present and we were touched.
— Alain Desgagner

“What I am going to keep in my mind, it’s about the philosophy of all the show, the culture of Chinese culture is very good, maybe more than any other culture that we have on Earth,” said audience member Alain Desgagner.

“Their way of thinking, which has travelled through the ages reaches us as people. I felt a strong sense in the culture towards the well-being of the people and the planet, and beyond that as well,” said Mr. Desgagner.

“The spirituality was very much present and we were touched,” he said.

All of China’s traditional beliefs contained the idea of self refinement—spiritual elevation through reflection and virtue. Mr. Desgagner said he was grateful to have been exposed to that.

“I believe that a human being should always improve himself and I believe the message [Shen Yun] gives us is to become better so that we can connect to life, and life will always lead us to the unique path,” he said.

It was a powerful experience, said many that night. For Mr. St. Arnault, it culminated in the Chinese dance story “The Lady of the Moon,” which is based on a classic legend that depicts the origins of the moon goddess Chang’E.

“At that moment, a great joy came upon me. I would have liked to sing [to the music]. At the same time, I took the time to truly enjoy that moment,” said Mr. St. Arnault.

“I experienced a beautiful strength,” he said, adding that it still enveloped him.

At first glance, at Shen Yun one sees the sophisticated dance techniques and exquisite costumes and hears the unique sound of the orchestra blending instruments from the East and West. For Mr. St. Arnault, their beauty was much enhanced by the inner character of the performers, he said.

“It was all magnificent—the music, the dancers, the flexibility, the flow, the free expression, the synchronicity of the movements. I loved the intensity of each person in the performance, their strength, their alignment, their presence,” he said.