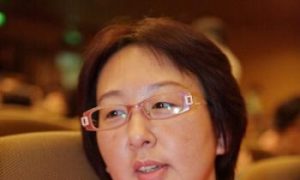 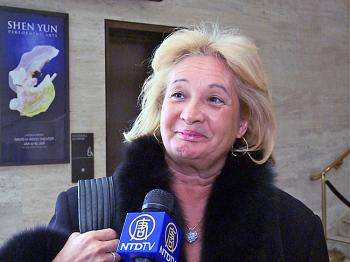 Ms. Flores-Vasquez has supported her community of Flushing, Queens for many years. Serving as the district leader, she has acted on behalf of the residents of her community to work with local politicians.

The 22nd Assembly District where Ms. Flores-Vasquez lives and works is one of the most ethnically and culturally diverse neighborhoods in the U.S. She said she was particularly impressed by the dances that touched on the themes of persecution and lack of freedom in China today, including a dance that addressed the persecution of practitioners of the Falun Dafa spiritual discipline.

One such piece is titled Our Story. It tells of a teacher who guides her pupils not just in the art of writing, but in life as a whole. One day the teacher writes the Chinese characters for “truth,” “benevolence,” and “forbearance” on the blackboard. These three words, which were once essential values in classical China, are central to Falun Dafa. Soon, state police burst into her classroom and take her away. Her students, who support her, are ultimately rewarded for their courage with a miraculous scene.

“The persecution that should have never happen—it should not be going on. And I think that with this program it's able to get that message out there to more people so they can see what's going on. There's a lot of beauty in their culture and they shouldn’t be suffering this way,” said Ms. Flores-Vasquez.

She also has a personal connection to the topic. “It's very emotional because my friend Jane [Dai], for example, she lost her husband. So it's very touching when you have an experience first hand.”

Jane Dai's husband was beaten to death in China in 2001 simply because he practiced Falun Gong; his body was later dumped in a field. He left behind Ms. Dai and their baby daughter, who learned of his death through an Internet posting.

Ms. Flores-Vasquez was also impressed by the Shen Yun artists' ability to address the difficult theme and present it with inspiration and integrity. “They're very special. The inspiration that they bring, and how they can turn something hateful into something so beautiful, and continue to move onward with integrity—I think that’s really beautiful, magnificent,” she added.

She also advocated bringing Shen Yun back more often. “As a matter of fact, I feel this show should happen twice a year and not just once. You need to bring it into the spring. I think they need to make this a seasonal program.”

“It’s a great pleasure to be here,” said Ms. Flores-Vasquez.

Shen Yun Performing Arts New York Company wrapped up its two-week run at Lincoln Center Jan. 16, in a sold-out matinee performance. The company will now travel to Schenectady, NY, to perform at Proctors Theatre on Jan. 19, and then continue its tour to perform at The Kennedy Center Opera House in Washington D.C., Jan. 26-30.