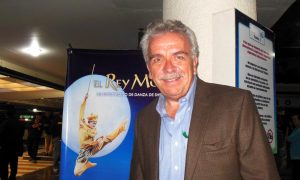 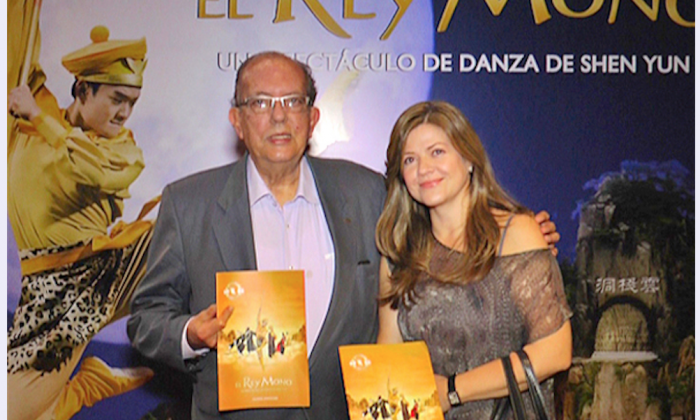 “The Monkey King” is based on the epic novel “Journey to the West.” It tells the story of a Buddhist monk who goes on a quest for sacred scriptures in the seventh century. He has three companions: Pigsy, a man-pig creature, Sandy, an ogre, and the magical Monkey King.

The production debuted in Mexico City and visited the Metropolitan Theater of Medellín on May 19 and 20.

“I think it’s an honor for us that this group has considered performing in Medellín,” said Juan Rafael Cárdenas Gutiérrez, chairman of the board at the Medellín Cultural Association and the Metropolitan Theater of Medellín, after seeing the performance on May 20.

“The show itself is a great harmony between music, dance, choreography, animation—for us it’s something very special. And that actually unveils or shows what Chinese culture is, because it gives me the impression that this performance has a goal, which is to rescue the Chinese culture of past centuries, which today it seems the Communist Party doesn’t want to reach China,” Mr. Gutiérrez said.

According to Shen Yun’s website, it is indeed the aim of the non-profit company to revive China’s ancient culture, which has been nearly destroyed under decades of communist rule in China.

“The company’s rich repertory is drawn from the pages of history, literature, and universal themes. Each year, Shen Yun produces an entirely new program of dances, songs, and musical scores,” reads the company’s website.

The story lines in Shen Yun’s “The Monkey King” production inspires us to reflect on where we come from, and our own journey home, according to the website.

María Patricia Marín Arango, director of Metropolitan Theater of Medellín, said the performance has an artistic side and a spiritual side.

“It has values and a beautiful background that this world needs so much right now,” she said, referring themes she observed in the performance, such as truth, benevolence, and tolerance.

“I think the world is eager for those values, so it’s a pleasure for us to transmit those values through [the ‘The Monkey King’ production] and to the more than 2,000 people that tonight were pleased to live the experience of Shen Yun’s ‘The Monkey King,'” she said.

“It’s something that really leaves a mark in our hearts, that teaches us a lesson.”

As Shen Yun’s website explains, the novel “Journey to the West” is a metaphor for spiritual cultivation. The ordeals the characters in the story face throughout their journey represent the trials and tribulations that one has to overcome on a spiritual path.

The performance is a chance to find “that spiritual nourishment…that moment when you let them touch your soul,” Ms. Arango said.

In short, she added, “it’s a performance with a very high artistic level, of great quality, of artistic mastery,with all magic, all the effects, everything that touches you when you are sitting in your seat at the theater.”

Mr. Gutiérrez said the performance allowed the audience to learn about the “qualities of Chinese people in all aspects,” including their musical heritage, their discipline, and inspiration.

“I hope they keep promoting this kind of show all over the world, because I think this is something that can’t be kept in a quiet and private way … this needs to be spread to all countries so everyone can realize what Chinese culture means, what acknowledging the values means, how values such as ethics, honesty, discipline triumph against all odds.”

With its portrayal of traditional Chinese values, Shen Yun shows a “path towards the future,” he added.

“They leave a message to us in Medellín, they leave us some teachings that I hope we can start assimilating to.”