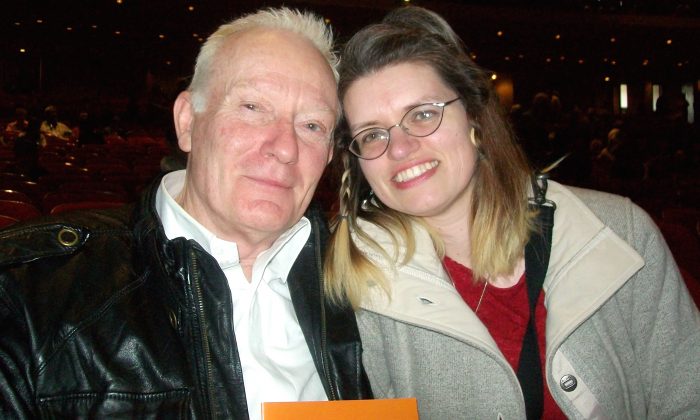 After receiving flyers last year, they said they made a point to make sure they performance did not pass them by this time around.

And the couple made it just in time. March 29 was, in fact, the finale performance for Shen Yun’s 2015 Portland run. The couple said they were not disappointed.

“I just appreciate the beauty of it all,” Mr. Bolter said. “It gives me peace.”

Mrs. Hewitt, who has experience in musical theatre performance, said she was most amazed by the dancers’ ability to synchronize so fluidly. “I really appreciate the artistry, and the commitment of it, and beautiful costumes,” she said, adding that she also really appreciated “the way the costumes integrated into the dance.”

Shen Yun, as a world-class performing arts company, is at the forefront of the world in terms of traditional dance, bel-canto vocal techniques, and East-West musical orchestration and arrangement. However, another important facet—if only less recognized next to the company’s more towering highlights—is its one-of-a-kind use of costumes.

“Every costume in a Shen Yun performance is presented with brilliant colors, displaying a splendid spectacle,” read Shen Yun’s website. Further, each piece seeks to embody genuine traditional attire, which ranges from emperors and generals to the common people. Each season, hundreds of pieces are tailored and recreated.

And along with the costumes, the couple enjoyed the storytelling, which depicts China’s 5,000-year-old, divinely imparted culture.

“Oh yes,” said Mrs. Hewitt, “That’s interesting in the performance—seeing the storytelling and how that’s incorporated into the story.”

Because so much of China’s rich legacy has been passed down in vivid detail, Shen Yun has a seemingly limitless repertoire from which to draw its inspiration. Moreover, these stories, coupled with the music and dance, embody profound inner meaning—an aspect Mr. Bolter picked up on.

He concluded that the performance reminded him “to have joy—even under difficult times.”

“That was special to me,” he said

“I mean, it was just wonderful—the whole thing,” said Ms. Spear. “We love the storytelling involved, and the music—just everything.”

Through music and dance—two pinnacles of traditional Chinese culture—Shen Yun takes its audiences on a wondrous journey through 5,000 years of Chinese civilization.

In terms of music, an important facet of Shen Yun is its one-of-a-kind mix of Western orchestration with the distinctiveness of Chinese sounds, which includes the erhu and its 4,000-year history.

Mr. Grant agreed, especially noting how Shen Yun’s exact mix of music, dance, and visual appeal arouses some unique feelings. “Absolutely,” he said. “It is such an experience to be able to see, to listen, and to get a really strong emotional connection.”

In terms of Shen Yun’s portrayal of ancient Chinese history, “I am someone who really enjoys history and the history of culture, and so when I see and hear things like personal experiences of others, I am able to really kind of be drawn in,” he added. “There is this amazing connection that happened I feel.”

Part of this connection stems from Shen Yun’s emphasis on ancient storytelling. “A unique feature of Chinese civilization is that its history has been documented and passed down uninterrupted for 5,000 years, sometimes in vivid detail,” reads Shen Yun’s website. The amount of stories thus offers a seemingly limitless array of source material from which the company can draw.

And Ms. Spear concluded that one of the best aspects of these stories is their emphasis on the human capacity to “forgive and understand people, make mistakes and still love them, and help them even if they hurt you,” she said.

Adding, “I just think that is a wonderful message for humanity in general.”