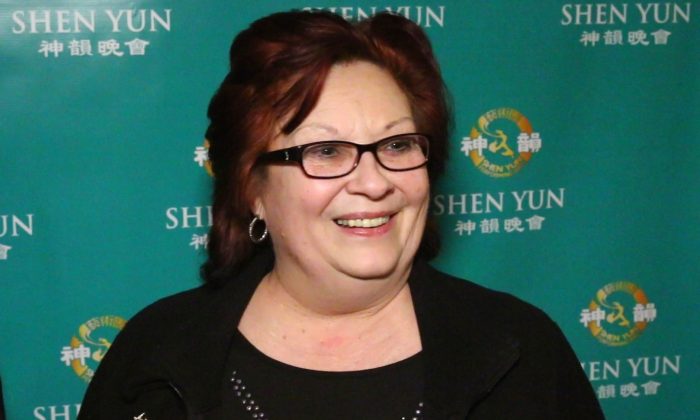 CHICAGO—Initially she didn’t know what to expect at the start of the performance on the evening of March 6, but by the finale of Shen Yun Performing Arts Touring Company’s program, ballet instructor Natalie Kolosci was left feeling inspired by nearly every aspect of the production.

Shen Yun is a world-class, premier dance and music company based in New York. Its mission is to restore the ancient customs and traditions of China through Chinese classical dance.

Mrs. Kolsci has extensive dance experience having performed with Joffrey of NYC and Ruth Page, Allegro American Ballet Company, and Ellis DuBoulay’s dance companies in Chicago, as well as the Kirov and Bolshoi Ballet companies from Russia.

Upon arriving, she didn’t know what to expect, but when we saw the first piece, she thought, “It was just—oh my gosh, I just loved it.” She thought everything was absolutely gorgeous.

As far as the dancers’ technique, she found them to be technically very strong and was impressed by their phenomenal height.

“The girls are so elegant and delicate,” Mrs. Kolosci explained. “The gentlemen are very strong and excellent dancers. I very much enjoyed it. I was ready to clap for everything that they did, like the aerial cartwheels and the walkovers—just the leaps.”

The Shen Yun program has several story-dances drawing from China’s mythology, legends, and history—from ancient times to the present day. Each one is introduced by bilingual (English/Mandarin) emcees.

The pageantry is created by a collection of handmade, custom-designed outfits that are perfectly created to match the digitally interactive backdrops of each segment of the program.

“The costumes and the background were so matched; it was phenomenal,” she exclaimed and remarked how precise the timing was for the dancers to interact with the backdrops so perfectly.

Shen Yun features a full-orchestra that showcases a unique blend of Eastern and Western sounds. It is, in fact, the only orchestra in the world that has this blend of instrumentation as its permanent configuration.

The elegance of the costumes and their correlation with the backdrops, the precise choreography, and just the idea of story-based dance were some of the ideas she plans to incorporate into her future dance instruction.

“I’m ready to go back to my dance school and put some of this choreography to my students now, because of the technique, number one, with elegance … the unison of all the dancers and the strength—’This is what I want!'” she exclaimed.