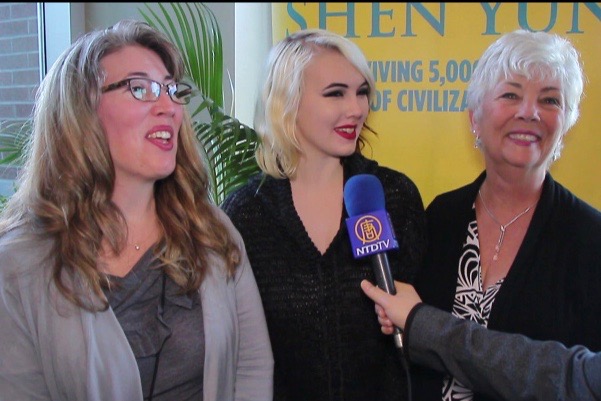 JACKSONVILLE, Fla.— On Sunday, Jan. 17, Shen Yun Performing Arts brought together a family of women spanning three generations—grandmother, mother, and daughter. Each affirmed Shen Yun’s message of compassion and its mission of cultural revival, while also relishing the beauty of classical Chinese dance and music.

It made me laugh. It made me cry.
— Sharon Echemendia

“It made me laugh. It made me cry,” Ms. Echemendia said. “I learned a lot of China today.”

Throughout the performance, her daughter, Blythe Byrd, was also moved to tears and laughter.

She was most inspired by the dances “Monkey King and the Dragon Palace,” “Fairies of the Sea,” and “Trial by Fire.” These three pieces include, respectively, a tale from a classic Chinese novel, an ancient Chinese legend, and a modern tale of good versus evil.

As the executive director of United Way of Putnam County, Florida, Blythe Byrd works throughout her community with a goal “to advance the common good”—part of United Way’s mission.

Shen Yun was thought-provoking, she said, and full of compassion. “I think the best way to get people to want to learn more is [to] show them beauty and compassion in any given culture.”

Ms. Echemendia described the dancers’ talent: “You felt their feelings. You understood what they were expressing through their dance, through their facial expressions—everything. It made you feel.”

A Shen Yun performance utilizes the universal language of dance and music to speak to theatergoers’ hearts and souls, transporting viewers to different times and places, spanning 5,000 years of ancient culture.

“Classical Chinese dance is rich with expressive power. Through expression of bearing and form, beautiful dance movements bring out the inner meaning of intrinsic thoughts and feelings, reflecting the peculiarities of human nature, the standard for human conduct, moral concepts, mental state, one’s value system, and so on,” the company website says.

Blythe Byrd’s daughter, Dakota Byrd, said she felt it was terrible what is happening in China today—the destruction of the culture. “I’m really glad that something like this exists,” she said of Shen Yun. “It’s beautiful.”

Blythe and Dakota Byrd both said they were especially moved by the dance “Trial by Fire.” “That really brought home the full impact of keeping this culture alive—people acting through compassion,” Blythe Byrd said.

“Trial by Fire” takes place in contemporary China. It shows a family joining a group of peaceful meditators who are practicing Falun Gong, a spiritual discipline that is persecuted in China today. Although wrong, police carry out orders to break the will of these practitioners, and as a result, the family is broken apart, and a little girl is left all alone. But the heavens are watching.

Dakota Byrd said, as a dancer, she was inspired by the talent onstage. “It was full-on compassion,” she said of the performance. She left with that feeling, too—taking compassion with her.

She said Shen Yun would also give people the impetus to preserve their own traditions and cultures, whether within their families, their local environment, or their nation.

“They just said everything I feel, that’s for sure,” Ms. Echemendia said of her daughter and granddaughter. She added that Shen Yun’s preserving the beauty of the culture is awesome.