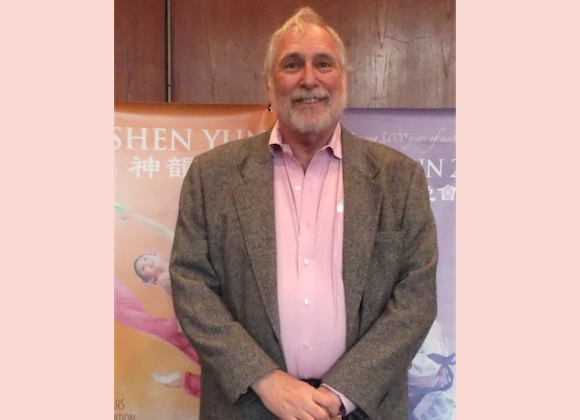 Ron Friedland was in awe of the beauty of Shen Yun Performing Arts at Portland's Keller Auditorium, on Jan. 19. (Chen Si/Epoch Times)
Company

PORTLAND, Ore.—Ron Friedland was in awe of the beauty of Shen Yun Performing Arts at Portland’s Keller Auditorium on Jan. 19, and he was moved by the universal values he shares in common with the performance.

“The values of honesty, of courage, of compassion for each other—these are things that are very moving—they’re universal good values,” said Friedland, a computer scientist. “There are good values that are expressed in the performance—good values, good people, and the artistry is phenomenal.”

“It’s a beautiful show about some beautiful ideals,” he added.

Throughout history, almost every culture looked to the divine for inspiration. Art was meant to uplift, bringing joy both to those who created it and those who experienced it. It is this principle that drives Shen Yun performers and their art.

“The part, especially with the lotus when they fought against the black shirts. The will that’s there—the beauty of the performance and the strong will behind it—I’m very impressed,” said Mr. Friedland, explaining his response to a piece depicting the courage of Falun Dafa practitioners.

“I have a friend who practices Falun Dafa, from China, and he’s taught me how important those values are. And I understand so much more talking to my friend and seeing this, how deeply the group is to doing what’s right—it’s very moving,” said Mr. Friedland. “I share those values.”

Today, Shen Yun’s artists—dancers, musicians, choreographers, composers, and the entire team—follow this noble tradition. For them, this spiritual connection is motivation for striving to excel, and it is the heart behind each movement of the dancer and each note of the musician. It is why audiences can feel there is something different about Shen Yun.

Mr. Friedland was no exception. “What impressed me was a combination of the artistry, the links to the ancient culture, and the very high values that I saw there. It was very moving,” he said.

“One of the things I learned is how the traditional Chinese values are so enlightened,” continued Mr. Friedland.

“That was really eye-opening for me,” Mr. Friedland said. “My family has long held Chinese culture and Chinese people with great esteem, and seeing this only increased my respect.”