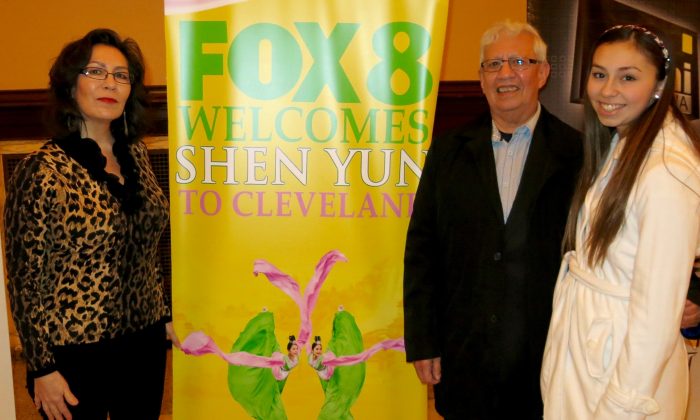 The music also inspired them. Shen Yun vocalists sing in the bel canto style, using Chinese lyrics. In one song, a Shen Yun performer sings about how the principles of atheism have caused people to leave behind spirituality (Translated English lyrics are projected onto a big screen). Ms. Jackson-Kusner understood the lyrics to mean that there is something beyond science to explain life and creation.

“In the end, the message should all be the same: compassion, love, caring—and there has to be something greater than just the science. I think that’s the universal message,” said Ms. Jackson-Kusner, who is manager at a local medical spa, Seriously Skin.

“By reading [the lyrics], you could interpret it your own way. You feel what it meant to you and your personal connection to it,” her daughter said .

As a competitive ballet, lyrical, and jazz dancer, Miss Kusner also appreciated the wonderful ways in which Shen Yun dancers incorporated different props to accentuate their movements, whether by using fans, scarves, or handkerchiefs.

Miss Kusner’s uncle, Joseph Rocha, joined them in watching the performance. He was captivated by the stories of China’s past and present displayed on stage. Shen Yun’s mission is to restore the values of China’s 5,000 year civilization, thus the dances depict stories from the culture’s beginning on through to today.

Some of the pieces portray the courage of Chinese citizens who are currently persecuted for their spiritual beliefs in China.

“I found that very interesting because they brought the story out to make the public aware what’s going on in China,” said Rocha. “They all have to fight the bad and have the good overcome the bad—there is hope for China. They showed that hope in the music and the dancing,” he said.

Ms. Jackson-Kusner joined in praising the narrative storytelling of the dances, calling the performance exuberant. A retelling of a classic legend about the moon goddess, called “The Lady of the Moon,” left the deepest impression on her. The piece depicts the love between the goddess and her husband.

“You could feel the beauty of the scarves added to the feeling of the music, by seeing [the dancers] interact the way they did,” she said.