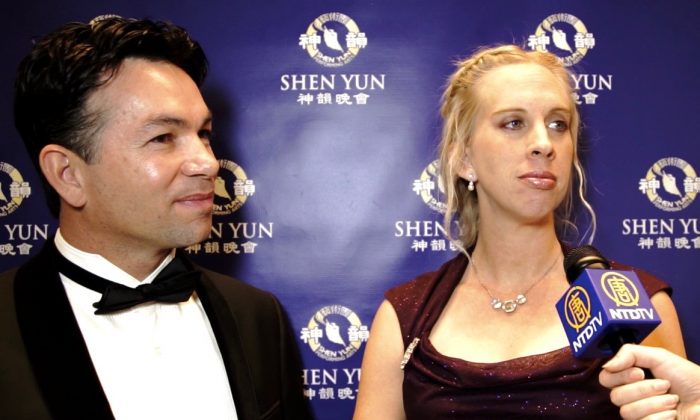 SAN ANTONIO—Four generations of artists attended Shen Yun Performing Arts at the Tobin Center for the Performing Arts, and there was something for everyone in the classical Chinese dance performance.

Sarah Bond, a professional ballet dancer of 32 years, attended the performance with her husband Robert, her yet unborn daughter, her mother, and her grandmother.

It was a birthday gift for Mrs. Bond, and “the best thing I could’ve ever gotten. I was super, super happy.”

She danced and taught until her current pregnancy, Mrs. Bond said, and has been in productions like “Sleeping Beauty,” “Cinderella,” and other classics since she was a child. Her grandmother was a professional ballet dancer during World War II, and her mother plays the flute.

“We’ve always had a lot of classical stuff in our life,” she said. It made the family all the more appreciative of New York-based Shen Yun’s mission to preserve some of the classical arts.

In 2006, a group of artists had come from around the world, including China, to form the performing arts company. For ten years now, the artists have been touring the world to present the nearly lost arts like the bel canto vocal technique, classical Chinese dance, the folk dances of China’s many regions, and, by extension, the essence of authentic traditional Chinese culture.

“It’s very important to stand up for what you believe in,” Mrs. Bond said. “It’s better to stand for something than to fall for anything … We believe in having good morals and good values, we teach our children that, we are glad to see somebody else like that.”

Shen Yun’s mission is so touching to many because of the tremendous hardship that preceded the company.

Unknown to many is the fact that the traditional Chinese culture Shen Yun is reviving is still oppressed in China, and has been since communism took power in 1949. The regime, officially atheist, still persecutes spiritual practices—a fact Shen Yun discloses.

Mr. Bond said, “That takes a lot of courage … to share such a strong message and to bring it in such a gentle way.”

“For people to understand, that’s very important,” he said. He felt he definitely got the message, and wanted to encourage the artists. “I think it’s a beautiful message, you should keep doing what you are doing.”

The artistic family expressed appreciation for the overall message down to the details.

“Every little thing from being coordinated, their toes pointed, hands, all of it, it all blends well together, beautifully. I know how important it was,” Mrs. Bond said.

She recalled with delight the aerial and tumbling techniques used in the overall graceful form of classical Chinese dance. The performers were always smiling, and wielded functional props effortlessly. In an upbeat Mongolian folk dance, they used thin, paddle-drums she had never seen before. In a different northeastern folk dance, they threw sparkling pink handkerchiefs into the air boomerang-style, performing a walkover before catching the handkerchiefs again.

Mrs. Claire Stafford, the grandmother who treated the family to the performance, said every bit of the props was used to perfection. She, also a former ballet dancer, said the dancers and beautiful costumes were extraordinary.

“The type of dancing—there’s nothing like it!” she said. “This is so beautiful and graceful.  You can just sit back and really enjoy, and you have peace, when you see something like this! It’s so peaceful and enjoyable.”

For Mrs. Stafford, there was also a message: “We all need to find our values and our moral standing.”

The culture today is pulling people downward, and people have “drifted away from what’s very important in our life,” she said.

We’ve become an egocentric society and “we need to find our way back.” Shen Yun encourages this, she felt. “You’re all doing a tremendous job here,” she wanted to pass on to the artists. “You’re all trying to reach a part of people, and I recommend everybody to come.”