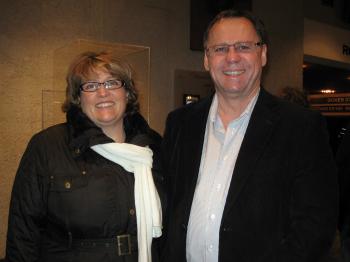 Larry and Marianne Witzel, an entrepreneurial husband and wife, said they appreciated the spiritual qualities of Shen Yun after taking in the classical Chinese dance performance at Centre In The Square Theatre in Kitchener-Waterloo Saturday night. (Allen Zhou/The Epoch Times)
Arts & Culture

By Epoch Times Staff
Print
KITCHENER-WATERLOO, Canada—Shen Yun Performing Arts opened the new year by taking its Saturday night audience on a trip through 5,000 years of Chinese traditional culture. With performances of classical Chinese dance and music, New York-based Shen Yun introduced one entrepreneurial couple to the beauty and the inner meaning of traditional culture.

“It was very good. The dancing was terrific; it was entertaining; it was beautiful,” said Larry Witzel, owner of Ontario Livestock Exchange Incorporated, an auction facility located in Waterloo. He is also on board of directors of the Livestock Markets Association of Canada.

With him was wife Marianne, a vendor for St. Jacobs Farmers Market.

She shared his enthusiasm about the show calling it beautiful and entertaining. She particularly appreciated the story-based dances.

“We learned a lot, actually. A lot of history,” she said.

Classical Chinese dance, one of the oldest and most sophisticated dance forms in the world, allows for a wide range of expression and allows the performers to perform any legend or story from China’s rich cultural repertoire. Among the works seen in Shen Yun’s show this year are scenes from China’s classic novels Journey to the West and Outlaws of the Marsh, as well as stories of courage from contemporary China.

Mr. Witzel was struck by the dance No Regrets, which tells the story of a young man and his mother. The young man begins to read a passage from Zhuan Falun, the main book of the self-improvement practice Falun Dafa, when he is attacked by Chinese police. The dance tells the story of the millions of Falun Dafa practitioners being persecuted in China today.

This performance moved Mr. Witzel’s deeply, he said. “It was very dramatic – you could see their emotions."

In addition to dance, Shen Yun also features bel canto performances by award-winning vocalists. Sung in Chinese, the lyrics were displayed on the backdrops.

“I also enjoyed the soloists and reading the translations on top. That was really interesting. I tried to decipher through that. It was good,” said Mrs. Witzel.

“Very spiritual,” she said of the culture on display.

Her husband also felt this. “Very divine and spiritual and very tied to the heavens,” he said.

“It was good to see that,” said Mrs. Witzel.

With reporting by Allen Zhou and Madalina Hubert.

Shen Yun will stage three more shows in Kitchener-Waterloo over the coming days before going on to Montreal and Toronto. For more information, visit ShenYunPerformingArts.org.