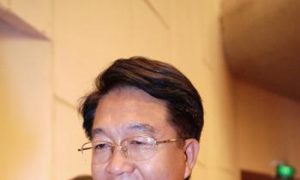 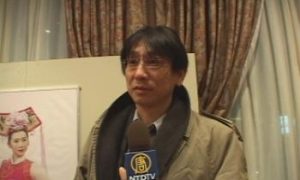 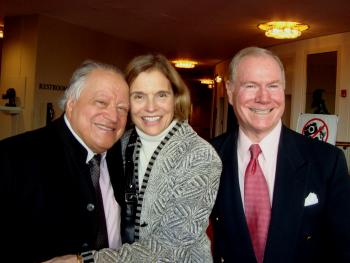 “It was really, really spectacular,” said Patrick A. Templeton, a senior consultant in the corporate and government relations field, after the show.

“To show 5,000 years, it was beautifully done, and educational,” he added.

The New York-based Shen Yun is a non-profit dance company with a mission to revive China’s rich cultural heritage. China’s traditional culture has been suppressed during 60-plus years of Communist Party rule in China.

“The performers are all very professional, and beautiful costumes, and the scenery was very interesting,” Mr. Templeton said.

“I like the reference to the deity and the spiritual,” he added. In particular he enjoyed the way the state-of-the-art backdrops were utilized to depict heavenly beings either flying up into the heavens or descending to the earth.

Mr. Templeton’s grandfather, George Templeton, started Technicolor in 1932. The company is now one of the world’s largest processors and distributors of DVDs and Blu-ray disks. The late George Templeton was also a director, best known for his work on the 1938 Western film Rawhide, and the road shows with Bob Hope and Bing Crosby.

Mr. Templeton’s wife, Charlotte, said Shen Yun was thoroughly enjoyable, noting the talent, the beautiful dancing, and the educational value of the narratives offered by the masters of ceremonies between programs.

“The costumes are so vibrant, it’s very happy and light. I loved the emphasis on truth, compassion, it’s just beautiful, everything about it is beautiful,” Mrs. Templeton said.

Fernando V. Galaviz, founder of The Centech Group, based in Arlington, Virginia, said after seeing the performance, “It’s about the culture, the sense of the culture, and the beauty.”

“The music has a well-balanced music blended with the Western … the arrangements are excellent,” said Mr. Galaviz.

Attending the performance with Mr. Galaviz were Tom and Molly Starbuckle.

Mrs. Starbuckle said the grace and skill of the dancers was phenomenal, and amazing.

Her husband agreed that the dancing was “phenomenal, absolutely phenomenal.”

“It was just really amazing, in terms of the story,” said Mrs. Starbuckle.