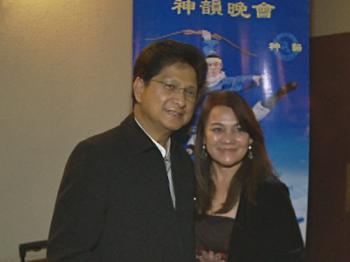 By Epoch Times Staff
Print
PASADENA, Calif.—One of the nation's most revered performance halls, the historic Pasadena Civic Center, played host on Friday evening, April 29, to world-renowned Shen Yun Performing Arts. The New York-based company has as its mission the revival of the spirit of ancient traditional Chinese culture.

The theater was filled with patrons from all areas of Los Angeles County and beyond, and among the audience were Mr. Rene Pane and his wife, Teresa, both originally from the Philippines. It was Mr. Pane’s birthday today and he wanted to see the show.

Both praised the performance and said they enjoyed the story-based dance, with each dance telling a story.

“It's very rich in culture, very unique,” Mr. Pane said. “The dancers are so graceful and each movement tells a story, so I really like it very much."

Mrs. Pane agreed with her husband, adding, “The show is beautiful, very colorful. The dancers are all graceful, both men and women. It’s beautiful!

“All the scenes tell us a beautiful story, about the teacher, the horses and the monks. I love the monks, that’s the funny one.”

Mrs. Pane was referring to Little Mischievous Monks in which, free of cares in the world, these young Buddhist monks engage in a little of their own training while the abbot is away.

Mr. Pane felt that all the Shen Yun performers were very gifted and that they must have been selected from the very best.

Mrs. Pane concluded by saying enthusiastically that they would recommend the show to others: “We will recommend it as soon as we get home.”