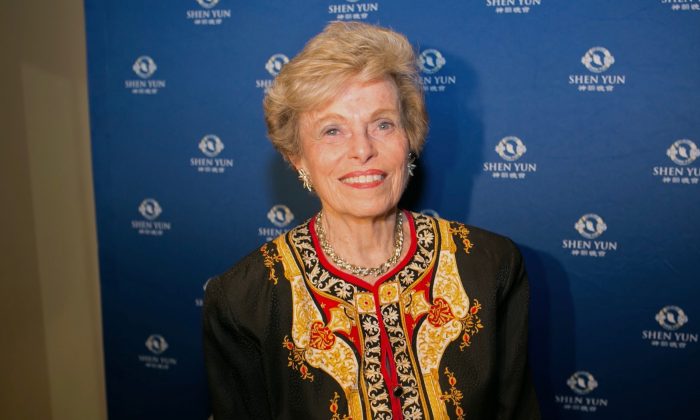 Ellen Sauerbrey, head of the United States Department of State's Bureau of Population, Refugees, and Migration during the George W. Bush administration and a former U.S. ambassador, enjoyed the performance of Shen Yun Performing Arts at The Hippodrome Theatre in Baltimore on Feb. 18, 2017. (Epoch Times)
Arts & Culture

BALTIMORE—Ellen Sauerbrey, the former head of the U.S. Department of State’s Bureau of Population, Refugees, and Migration, was in for a treat when she saw the evening performance of Shen Yun Performing Arts at The Hippodrome Theatre on Feb. 18.

“Fantastic! The costumes, the dancing, the choreographing, the music—everything was just spectacular. I enjoyed it thoroughly,” said Ms. Sauerbrey.

“The performance, the artistic capabilities, the talent was just something I would go home and tell all my friends who were not able to be here about,” she said.

“It is truly beautiful, something we don’t have anything like in American culture.”

Ms. Sauerbrey served as the minority leader in the Maryland House of Delegates in late 1980s and early 1990s. In 2002, she was nominated by President George W. Bush to be the U.S. ambassador to the U.N. Commission on the Status of Women. She was later selected by President Bush to be the assistant secretary of state for population, refugees, and migration.

Throughout her career, Ms. Sauerbrey has made several trips to China, and so she said she was touched by parts of the performance that show the hardships in modern day China under the communist regime.

“It all touches my heart because I know the pain, I know the suffering, and I wish the United States could do more to change what is happening to good, decent people, that should not be treated or mistreated in the way they are,” she said.

“I think it’s wonderful that there is an opportunity like this to bring this to the attention of a lot of Americans who don’t know what is happening in China.”

Based in New York, where it enjoys artistic freedom, Shen Yun was formed in 2006 by a group of leading classical Chinese artists who wish to revive China’s divinely-inspired culture. Shen Yun travels the world each year, putting on exhilarating performances of classical Chinese dance and music rich with values and virtues from China’s 5,000 year history.

“I think [Shen Yun] opens up people’s eyes and makes us be aware of things most people have no reason to know about, and of course to see the culture, to recognize that in China the culture is not even encouraged or allowed, and we are so fortunate in the Western world that we are able to see it and enjoy it,” said Ms. Sauerbrey.

“I had the opportunities on several occasions to visit China as ambassador from the U.S. and to talk about human rights abuses, including what is done in the situation of Falun Gong, so it meant a lot to me to see this tonight.”

It meant a lot to me to see this tonight.
— Ellen Sauerbrey, former U.S. assistant secretary of state

Shen Yun also inspired Ms. Sauerbrey to learn more about the Chinese culture and the storylines presented in the dances, ranging from scenes from heavenly kingdoms, ancient legends and battle fields, to scenes from modern day China.

“It was such a beautiful evening,” Ms. Sauerbrey said.

“It was a really inspiring treat for me to be here.”