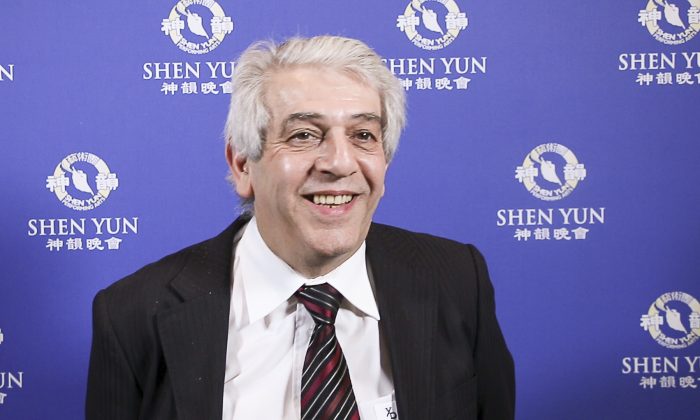 PARIS—Jean-Jacques Belhasen, the creator and leader of the Lana Di Capra brand, a house specializing in ready-to-wear cashmere, said he found Shen Yun dazzling and enriching—”from the stage design to the tenor, the pianist, the dancers, the orchestra.”

“I found it very harmonious. Everything blended together perfectly,” Mr. Belhasen said. He and his daughter, Charlène Belhasen, attended Shen Yun Performing Arts’ opening night at Le Palais des Congrès, in Paris, on the April 21, 2017.

Mr. Belhasen was also struck by the values conveyed in the show—”the value of love, joy, not only for ourselves, but for others as well.” “This show is a witness to “a China that is no longer there today.”

He felt love coming from the artists. “One truly sees their good heart,” he said. He was particularly touched by “their relationship with the other.”

“Love is very important—love for oneself but above all, love for others. I think this is a philosophy that we Westerners do not know, and it is unfortunate. It is sad. We should open a little bit more,” he said.

Mr. Belhasen hopes the show “will keep going for a long time and that one day it will be playing within the Great Wall of China!”

Charlène Belhasen is a designer for Lana Di Capra. “The music, the movements, the colors transported me into a truly magical place,” she said. “It feels like traveling in space, in time … like when there were flowers appearing from pieces of fabrics and taking their flight.”

The music particularly touched her, especially the tenor Tian Ge, “who has an incredible voice with such power!” she said.

The performance of Linda Wang, the erhu soloist, was also a highlight for Ms. Belhasen: “It was incredible—the sounds that could come out of those two strings!”

The erhu is a violin with only two strings, yet it is said that this instrument, which goes back many thousands of years, can emit a diversity of sounds, even imitating the human voice.

“I can’t believe I experienced this and I am really happy to have had the chance to be transported into [Shen Yun’s] world,” Ms. Belhasen said.

As a professional in the fashion industry, Ms. Belhasen could also appreciate the quality of the costumes. She described “their colors and movements as noble.”

She explained that the relationship between color and movement creates an “emotional strength for the spectator: the contrasts, the strength of each color, and the strength in the gestures of the dancers.” “This emotion really warms my heart and makes me feel serene and … like I’m on my little cloud.”

Ms. Belhasen, a fashion designer herself, paid tribute to Shen Yun’s costumes designers and seamstresses, who, through the costumes, are also present onstage, she said.

“Shen Yun brings me joy, serenity, and much happiness, a lot of strength and hope,” she said. “I think it’s very important—it’s possible today—with hope and belief, to be able to do great things.”