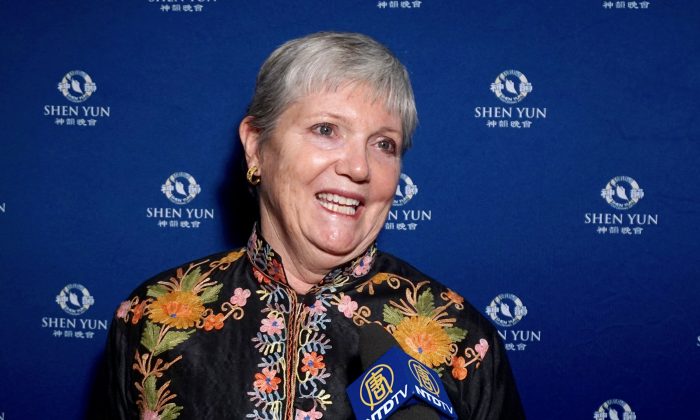 Beth Houser felt that Shen Yun brought her joy and peace. It touched her heart at the March 30 Shen Yun Performance in Charleston. (Courtesy of NTD Television)

CHARLESTON, W. Va— “I can’t say enough. I think anybody who misses Shen Yun will miss a life-changing experience. Everyone should see this performance,” said Beth Houser.

In a sense, Ms. Houser came clear across the world to see Shen Yun Performing Arts at the Clay Center for the Arts & Sciences of West Virginia on March 30.

She had flown as a flight attendant for United Airlines for 35 years, and happened to be in Japan as she was just about to retire. She saw an advertisement on Japanese television and when she came home to Lexington, Virginia, she looked up Shen Yun’s schedule and immediately bought a ticket. She drove three hours just to see the performance.

It’s not only music and dance, it’s about inner change and spirituality, and we need more of that in the world.
— Beth Houser

She also felt it was uplifting and life-changing. “It’s not only music and dance, it’s about inner change and spirituality, and we need more of that in the world,” she said, speaking through tears.

Ms. Houser is a musician who studied voice for many years and believes that music, in its vibrations, is a form of spiritual energy.

“When you have a certain gift or a certain type of tone or sound, it touches people’s hearts. … So I feel that this, the message, and the vibration of the music, and the voice moved me and I’m sure it would move many others,” she said.

In bringing the performing arts of traditional China to the world, New York-based Shen Yun is simultaneously bringing out China’s spiritual tradition. In the past, the arts always showed the relationship between the divine and humankind.

And in Chinese culture, music in particular was considered an art that could heal the soul. In the voices of Shen Yun’s bel canto singers, she felt that healing. She also gleaned a deeper understanding of the culture’s philosophies as the Chinese lyrics were translated to English on the backdrop.

She knew, too, that these traditions and beliefs are not welcome in China today—at least not by the state.

Due to work and travel for pleasure, she had visited Beijing, Shanghai, and other places in China many times in her life. She was very aware of the oppression by the communist regime on groups like Falun Gong, who follow a spiritual cultivation path.

Falun Gong is a type of qigong that encompasses spiritual beliefs as well as exercises. Tai Chi is another type of exercise, although its philosophical teachings have been lost over the years.

“I used to watch elderly people do Tai Chi in the park opposite our hotel, and the synchronicity of the movement was so beautiful, even though there was no music, you could almost imagine the music,” she said, recalling one of her memories.

She considered the basis of these exercises, a “bringing forth the inner person, the spirit, from the inside to the outside.”

Shen Yun did that for her. She was left with “just joy and peace … it was just a wonderful experience. It touched my heart,” she said, coming to tears again.

“Better than any therapist,” she said laughing.