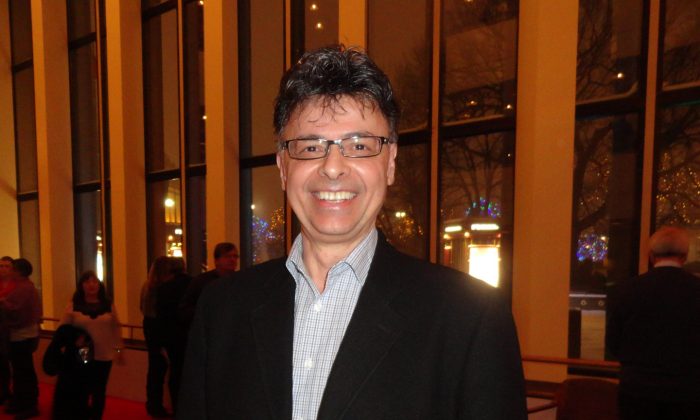 Shen Yun ‘Touches All Your Senses at a Heightened Level,’ Says Foundation CEO

OTTAWA, Canada—Marco Pagani was captivated by the enchanting world of ancient China and its legends presented by Shen Yun Performing Arts at the National Arts Centre on Saturday night.

“It’s wonderful to see 5,000 years of Chinese culture. The colours, the dance, the music—it’s absolutely fantastic,” said Mr. Pagani, president and CEO of the Community Foundation of Ottawa, a charitable organization with a mission to nurture philanthropy and work to have an enduring impact on communities.

“I think the grace, the quality of the dancing, the movements, the colours are totally spectacular,” he continued.

“It touches all your senses at a heightened, heightened level in my opinion. So I think it’s wonderful.”

Shen Yun’s mission is to revive traditional Chinese culture through the performing arts. The New York-based company uses classical Chinese dance to depict age-old stories and myths that embody traditional values like loyalty, compassion, bravery, and respect for the divine.

“The way they integrate the dance, the music, and the visuals, and the back with the video (backdrops)—it’s truly a multimedia spectacle, and I think they do it spectacularly well with just a ton of grace. The grace truly comes out,” he said.

Mr. Pagani has worked in both the corporate world and Ottawa’s not-for-profit sector. He began his career with Nortel Networks in 1985, where he spent almost two decades. He has also served as chair and CEO of various successful start-ups, and led the boards of several local charitable organizations.

According to the Shen Yun website, China was once known as Shen Zhou, The Divine Land—a land where it was believed that the divine transmitted a rich culture to the people of the earth. For thousands of years, Buddhist, Taoist, and other disciplines were at the heart of society. Calligraphy, music, medicine, attire, and much more were said to have been passed down from the heavens.

Some of the story-based dances depict this divine aspect of China’s traditional culture.

“As I’m watching it, I’m learning, I’m reflecting my own spiritual kind of views. So there’s a Creator, right? We all believe in a Creator it seems. There’s a notion of Heaven so I think the spiritual components to me are always the deepest, most profound pieces for sure,” Mr. Pagani said.

He commented on the dance “The Power of Compassion,” a contemporary piece depicting the ongoing repression of adherents of Falun Dafa, a spiritual discipline rooted in ancient Chinese culture.

The piece tells how a Communist Party police officer slips and hurts his knee while trying to violently apprehend young Falun Dafa meditators. The young people stop trying to flee and help the officer, leading to an unexpected outcome.

“It was a communist policeman who was going after these spiritual people that were meditating and even though he was trying to do them harm, their response was one of love and I think that’s a lesson we can all learn and hopefully apply and make our city the best it can be,” Mr. Pagani said.