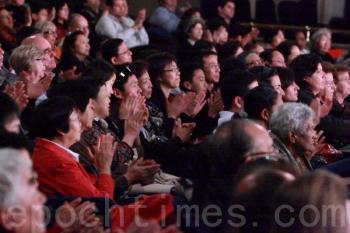 TORONTO—Shen Yun's portrayal of triumph over adversity was “very touching” and “very moving,” said a lawyer who works for a government human-rights commission.

Among the diverse performances included in Shen Yun's show are those that portray the longstanding Chinese belief that good people are ultimately rewarded, even if not in this lifetime.

An example is a performance in which a Chinese father is persecuted for his belief in Falun Dafa, a spiritual discipline that focuses on principles of truth, compassion, and forbearance, but is oppressed today by China's authoritarian regime.

“Any time you see something about someone being persecuted and overcoming difficult obstacles it's wonderful to see. Hope is always important."

“I try to help people in what I do and overcome their own persecution,” Mr. Rajan said of his work.

"I wish I could do some of those moves, I could impress my wife," he laughed.

Mr. Rajan was joined Saturday night by his wife, Cavati, a schoolboard counsellor.

"It was mesmerizing,” she said. “It was an absolute feast for the senses. I was so touched by so many of the scenes, and of course the connection to spirituality and the divine.”

"It was the first time and was remarkable, I loved it," she added. "I would say it is a must see."

Shen Yun will finish its Toronto run on Sunday but is due to return with its all-new 2010 program sometime in January. For more information, visit ShenYunPerformingArts.org