Shen Yun Took Us Into an Ancient World, Theatergoer Says 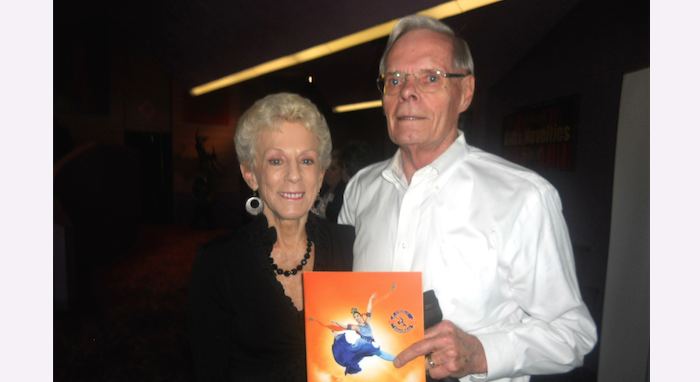 Victoria and Jim Bergdahl attended the Shen Yun performance at the Van Wezel Arts Hall in Sarasota, Fla., on April 23. “I loved it. It took us into this ancient world,” Mrs. Bergdahl said. (Edie Bassen/Epoch Times)

SARASOTA, Fla.—Victoria Bergdahl is well-acquainted with the problems besetting China. “It breaks my heart for China, [for] the people in China,” she said after seeing a Shen Yun dance scene in which a person of faith is persecuted.

“I had a Chinese roommate after college, when I first came to Washington, D.C., and her family and another friend had escaped out of China,” she explained, saying there were many stories of repression that could be told about China.

Because Shen Yun Performing Arts is located in New York, it has the freedom to portray the repression in China. For the same reason, it is also able to present, through story-based dance, China’s traditional values, which have been undermined since the Chinese communist regime began to systematically dismantle the traditional culture.

“Shen Yun cannot be seen in China today, where traditional culture has been nearly lost,” Shen Yun states on its website. “Yet Shen Yun—a non-profit organization—has become an international phenomenon, bringing the wonders of ancient Chinese culture to millions across the globe.”

Before retirement, Mrs. Bergdahl represented oil, natural gas, and agriculture before Congress. In the final part of her career, she worked for the Department of Transportation.

Jim Bergdahl, who attended with his wife at the Van Wezel Arts Hall on April 23, is also retired. He worked for the federal government for 52 years. Starting in 1995, he was part of the Courthouse Management Group, formed to oversee and manage the “largest federal courthouse construction program in the nation’s history,” according to U.S. Rep. James Moran, who honored him at his retirement.

“I loved it. It took us into this ancient world, and that was part of what the folklore was like in China,” Mrs. Bergdahl said.

She could not name one dance that was better than another. “I would have a favorite, and then it would be another, so I can’t tell you a real special one, honestly, because there was so much to take in.”

The retirees now enjoy ballroom dancing and thus enjoyed Shen Yun’s dances from an aesthetic point of view. Mrs. Bergdahl thought the artistry of both the male and female dancers was gorgeous.

“That’s one of the reasons why I wanted to go,” Mrs. Bergdahl said. “We are dancers, and it’s amazing. … It’s gorgeous.” She found the abilities, accuracy, and precision of dancers to be inspiring and awesome.

“Very impressed,” Mr. Bergdahl said. He enjoyed the “beauty of the costumes, all the dance, and learning about China, too—history.”

Mrs. Bergdahl’s sister and brother-in-law are professionally trained singers, and so Mrs. Bergdahl enjoyed the award-winning vocalists who sing in Chinese and yet employ Italian bel canto technique. “The singers were absolutely gorgeous,” she said.

The couple said they would tell their friends not to miss the performance because it is wonderful.