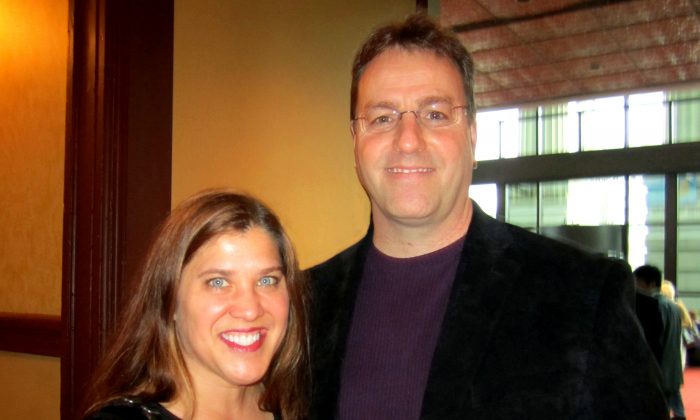 Eye specialist Michelle Edsall and her husband, pharmacist John Edsall of Cary, N.C., were enthralled by what they saw.

Classical Chinese dance is grounded in 5,000 years of traditional culture and is built upon a deep foundation of traditional aesthetics with its unique dance movements, rhythms, and inner meaning, according to the company website.

Mr. Edsall said, “The complexity of the dancing is fantastic, the synchronicity of the dancers, the costumes are fantastic. Brilliant, beautiful colors, it’s a great show.

Every costume is hand-made, ornately decorated and presented with brilliant colors, displaying a splendid spectacle—from the Tang Dynasty’s “Raiment of Rainbows and Feathers” to imperial dragon robes, phoenix coronets, and cloud capes, according to the Shen Yun website

Mrs. Edsall described Shen Yun as complex, and deeply rooted in tradition. “It’s a beautiful thing that we could all learn from—incredible,” she said.

In 2006, a group of leading classical Chinese artists came together in New York with one wish: to revive the true, culture of China and share it with the world.

“I would say the show is fantastic, it’s exhilarating.”

“It’s wonderful, the costumes are great, I love the music, the dances are fantastic,” Mr. Reza said. “I like learning about cultures, it’s a good showcase to display the Chinese culture, fantastic.”

Sophisticated dance techniques, an orchestra joining instruments from both the East and West, beautiful costumes, and a stunning back drop—this is Shen Yun at first glance, says the website.

But digging deeper, one discovers a sea of traditional Chinese culture. Mortals and divine beings merge on stage as one. Principles such as benevolence and justice, propriety and wisdom, respect for the heavens, and divine retribution, all come to life, washing over the audience.

Originating from Confucianism, Buddhism, and Taoism, these ideals are the essence of traditional Chinese culture.

“I learned a lot so far,” Ms. Wahid said. “It showcases the culture very well –mesmerizing.”