Shen Yun ‘the experience of a lifetime’ 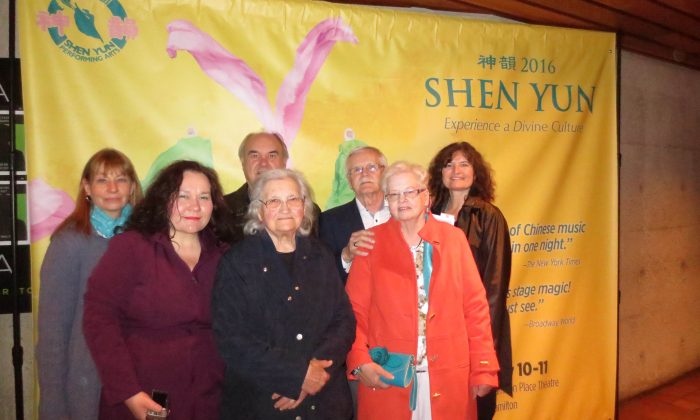 HAMILTON, Canada—Shen Yun Performing Arts played the last of its Canadian tour dates Wednesday night at Hamilton Place Theatre, leaving those who came with new thoughts on an ancient culture.

Small business owner John Sandor came with six family members. It was a gift from his niece who has a deep appreciation for the performance, and Mr. Sandor said he was grateful to be there.

“We loved it very much. The whole program—it was something so out of this world,” said Mr. Sandor who owns a retail store in St. Thomas.

The world’s premier classical Chinese dance and music company, Shen Yun was established in New York in 2006 with a mission to revive 5,000 years of divinely inspired culture. It has since toured the world bringing ancient virtues to the stage including the idea of harmony among Heaven, Earth, and humankind, an important principle in traditional Chinese culture.

Mr. Sandor said he got an important lesson from the performance about how to become a better person.

“If we could get away from selfishness and be more considerate towards other people, that would help; that would put us a lot closer to becoming a better person,” he said.

“The whole [performance] was inspirational,” he said noting that one could see the goodness and the emotion reflected in it.

He was also particularly impressed by the dancers.

“It was just beautiful. It looked like the girls were walking on clouds,” he noted.

Also in the audience was Arturo Mahecha, a staff supervisor at McMaster University. The performance left him with a feeling of beauty, happiness, and perhaps something more.

“When I saw the dance, another world appeared before me,” he said.

Mr. Mahecha could not quite describe what he saw, but it left him wondering, “Maybe [it was] the future world,” he said.

Caroline Hamel had seen Shen Yun twice before and brought her friend Helga Tomko to see the performance as a birthday gift.

“I love it,” said Ms. Tomko who runs a private daycare and also works as a graphic designer.

“The dancing is very fluid and the costumes are very fluid,” added Ms. Hamel, a real estate agent.

As a graphic designer, Ms. Tomko also commented on the colours in the performance. “The colours are amazing. They’re bright, they’re vibrant—bright blues and pinks and greens together. It’s just happy—it makes you happy,” she said.

“It’s beautiful. The music is beautiful too,” concluded Ms. Tomko.