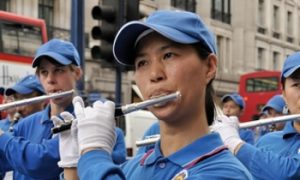 He was most impressed with the cultural relevance of the divinely inspired 5,000 years of Chinese history and the precision of the dancers.

“A performance by Shen Yun is a presentation of traditional Chinese culture as it once was: a study in grace, wisdom, and the virtues distilled from the five millennia of Chinese civilization,” according to the Shen Yun website.

“The overall morals attempt to get the main points across and do get across to the audience and can be adapted to cultures around the world and that is why [Shen Yun is] able to go around the world. I think it is universal.”

The 5,000 years of traditional history is told through stories and beloved legends brought to life by classical Chinese dance, ethnic and folk dance, a unique orchestra, award winning vocalists, and spell-binding animated backdrops to take you to far away places.

“It's a very good precision that they have with each other in the dance numbers and so forth, it's very impressive,” said Mr. Dennis. “I would recommend [Shen Yun] and certainly plan on coming in future years to the additional productions.”

“How the choreography inter-lapped so exactly. They do not seem to make an error. It all flows so easily and that's very impressive.”

Mr. Dennis describes the precision of the Shen Yun dancers in more detail. For example, “the dances with the flowing dresses, when they are going across the stage, where everything works within seconds of one another so that's the precision—that's very excellent.”

He certainly enjoyed the dances showing parts of China's history.