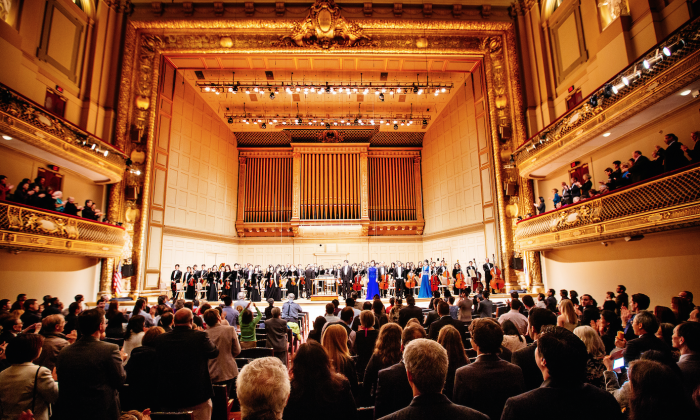 BOSTON—At first Shen Yun Symphony Orchestra looks like a typical symphony orchestra, but as they start to play, it is evident that the music draws on both the traditions of classical music of the West and five milennia of Chinese history.

“When they play, it touches your soul,” said Angela Chrispim during intermission at a concert at Boston Symphony Hall on Oct. 21. “[I’m] very, very touched.”

Ms. Chrispim, a piano and flute teacher of 20 years, said she found it a beautiful, heartwarming experience, because of what she felt from the musicians.

I can feel it inside my heart. Sometimes I feel like I want to cry when I hear the sound they’re playing.
— Angela Chrispim

“They can transmit to you what they are playing,” Ms. Chrispim said. “I can feel it inside my heart. Sometimes I feel like I want to cry when I hear the sound they’re playing.”

The orchestra is part of Shen Yun Performing Arts, which formed in 2006 to revive the divinely inspired traditional Chinese culture through music and dance. In many past interviews, the orchestra musicians have spoken of the importance of keeping a compassionate, open heart in their craft. In the program, it states: “Entirely nonprofit, Shen Yun aims to better the world by reviving lost traditions and nurturing positive values.”

Ms. Chrispim had praise for every aspect of the performance and ensemble and said she wished to share what she saw and heard with her friends, who all play or teach music as well. As a musician, she was impressed with the technical skill, but beyond that experienced incredible feelings.

“I think the teachers if they come to this performance they can learn a lot, and they can feel a lot,” she said emphatically.

“The experience is very touching, and I feel a lot of compassion,” Ms. Chrispim said.