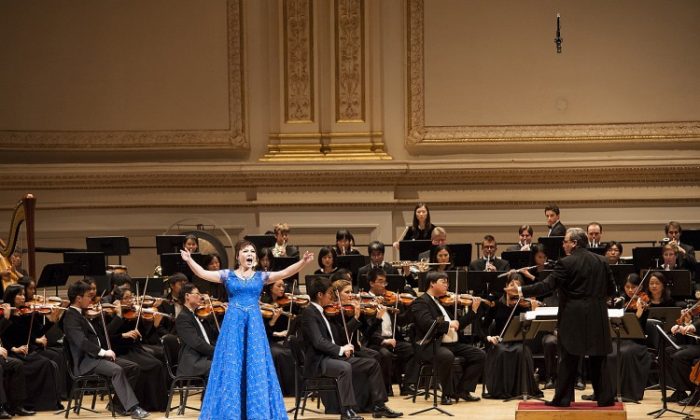 NEW YORK—Classical music lovers may think they have heard it all, but the classical world of music has just opened up new boundaries with Shen Yun Symphony Orchestra’s debut at Carnegie Hall on Oct. 28.

Shen Yun compositions integrate the strengths of Western symphonic instruments with traditional Eastern instruments—creating a sound like no other. In one piece, the two-stringed erhu, along with the woodwinds and muted trumpet, evoke the elegance of the Ladies of the Manchu Court. In another, the trumpets take center stage in an inspiring rendition of Vivaldi’s Concerto for Two Trumpets in C Major, RV 537.

Shen Yun Performing Arts is a classical Chinese dance company based in New York. With a mission to revive 5,000 years of Chinese culture, it has three touring companies that perform on top stages around the world. Each company is accompanied by a complete orchestra.

The Carnegie performance featured over 90 musicians selected from those orchestras and three Shen Yun conductors—Keng-Wei Kuo, Antonia Joy Wilson, and Milen Nachev—took turns with the baton. The program also included masterful solos from Shen Yun’s singers, who perform using bel canto technique while singing Chinese texts. The lyrics and scores of these are all original Shen Yun pieces.