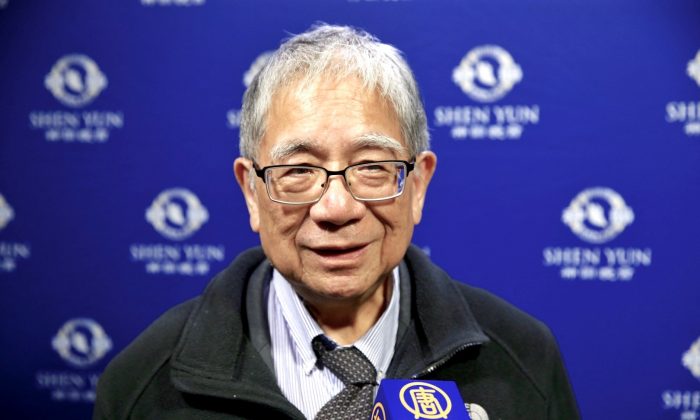 KEELUNG, Taiwan—An award-winning scientist, age 80, experienced what it would be like to be in heaven. He felt he was with gods when listening to Shen Yun Symphony Orchestra.

Deeply impressed by the concert’s last piece “Divine Compassion,” Dr. Chan experienced the feeling of reaching God. It was “like in heaven—you reach up to meet god,” he recalled.

“‘Divine Compassion’ demonstrates the power of goodness to defeat evil and transform the world,” the program says.

As part of Shen Yun Performing Arts, a classical Chinese dance company based in New York that has a mission to revive 5,000 years of Chinese culture, the Shen Yun Symphony Orchestra produces original music to accompany the dances. When performed in concert form, the music depicts stories that impress and inspire the audience.

Dr. Chan shared what inspired him in the piece: when people show their compassion to God, God will show compassion to them as well.

Born in the United States, Dr. Chan often went to concerts before being invited to join Taiwan’s National academy by its former president, Lee Yuan-tseh, a Nobel Laureate, 18 years ago. He had never had an opportunity to listen to such a concert in the United States though.

“It’s hard to come by,” he said, admiring the uniqueness of Shen Yun Symphony Orchestra and expressing his wish to be part of an orchestra like this if he were young.

As a new frontier in classical music, the orchestra gives its audience a one-of-a-kind experience with a brand new sound by blending the beauty of ancient Eastern instruments with the grandeur of Western ones.

Among the ancient Chinese instruments in the orchestra, the erhu stood out for Dr. Chan.

“The three erhu players are really the best,” he said. He was amazed that the subtle sound produced by the ancient Chinese instruments was not overwhelmed by the clear and bright tones of the violins.

According to Shen Yun’s website, the erhu, known as Chinese violin, has a history of over 4,000 years. Though it has only two strings, it is incredibly expressive, capable of conveying a wide range of emotions.

Proud of the Musicians

Among the orchestra’s vast repertoire of original works, Western classical favorites, and featured solo performances, Dr. Chan most enjoyed the Taiwanese melody “Green Mountain” with a new interpretation by the orchestra.

The piece depicts “the beauty and strength of the young people of the Alisan region and their eternal connection with its rivers and mountains,” the program notes.

“[The] music is very, very beautiful because it is inspired by nature, by the beautiful island.”

He was elated by the devotion of the New York-based orchestra to promote the Eastern culture with its music.

“We should be very, very proud of them!”