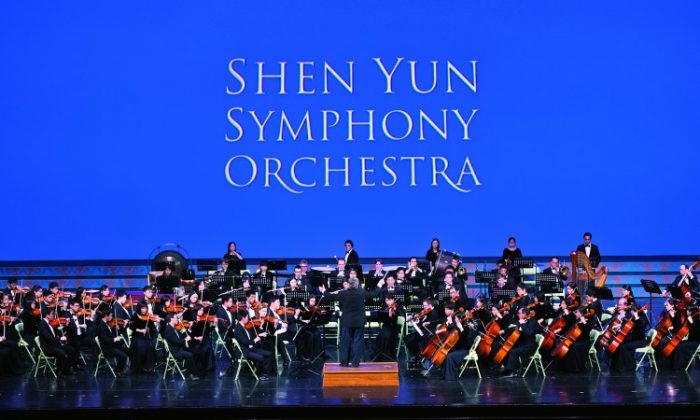 NEW YORK—The orchestra opened with an air of eminence. The violins supported the trumpets’ regal, lustrous tones, which resonated throughout the hall. It was a wonderful, symphonic opening of a performance of Shen Yun Performing Arts last season, but what came next was a stirring surprise.

The orchestra quieted for the entrance of the erhu, the two-stringed Chinese violin that is known for its emotional expressiveness.

This is a typical composition for the Shen Yun Orchestra, a group that combines the finest qualities of both Eastern and Western music. The orchestra is premiering at Carnegie Hall on Oct. 28.

“I think blending Eastern and Western instruments together into one symphony orchestra has never been done successfully,” said Chia-Chi Lin, the Shen Yun Orchestra spokesperson. “But our composers have a special technique.”

The Shen Yun Orchestra is able to capture the grandeur of Western symphonic orchestras and blend it with deeper musical expressions of Chinese instruments.

The erhu can sound like a neighing horse in its high ranges and a deep, somber lament in its lower tones.

“You automatically feel it. The erhu can bring out the emotion right away,” Lin said. With such additional Chinese musical elements, the Shen Yun Orchestra is able to create a fuller dimension in their music.

The Shen Yun Orchestra started off as the accompaniment of Shen Yun Performing Arts, a classical Chinese dance company founded in 2006. The company’s mission is to use music and dance to spur a revival of traditional Chinese culture, which was destroyed during the Chinese Cultural Revolution over three decades ago.

Shen Yun translates as “the beauty of the divine” in Chinese. The performing arts company has toured to 23 countries and performs annually at venues such as the Kennedy Center in Washington, D.C., Lincoln Center in New York City, the Capitol Theatre in Sydney, and the London Coliseum.

Lin has been touring with Shen Yun since its launching in 2006. “I’ve heard a lot of feedback from the audience, [and] they say, ‘The orchestra is wonderful, and why can’t we see them more?’ This is their best chance,” she said.

“It’s every musician’s dream to perform at Carnegie Hall. I think this is the best place for
Shen Yun Orchestra to present itself for the first time. We are very excited,” she said.

One of Lin’s favorites is “Snowflakes Welcome Spring,” a song that accompanied the dance of the same title. It is about the mirthful transition from winter to spring. The song is written in the musical style of the Shanxi and Hebei regions in Eastern China.

Adorned in white costumes, the dancers perform complicated twirls with their ivory sequined handkerchiefs. At the end of the dance, a green handkerchief appears amid the pristine field of white.

The orchestra supports that moment with a decrescendo and the entrance of the flute. “It’s my favorite because it represents hope. All the Shen Yun Orchestra pieces have individual stories,” Lin said.

“We’re performing our very best pieces. … Of course, we have some others, but we cannot squeeze all of them into one program,” Lin said.

Shen Yun fans can be assured that one of their most beloved songs, “Ladies of the Manchu Court,” will be on the program list. The erhu and the muted trumpet have a duet in the beginning of the song to set the scene of a grand, yet elegant, atmosphere of the noble women in the royal Manchu Courts (1644–1911).

Other charming East and West combinations include the flute and pipa, which are often played together to symbolize the auspicious dragon and phoenix pair.

The pipa, or Chinese lute, is a plucked instrument with a body that abides by traditional Chinese measurement. It is 3 feet 5 inches long. The three symbolizes the three powers of heaven, the earth, and man; and the five symbolizes the elements of metal, wood, water, fire, and earth. Its four strings, meanwhile, represent the seasons.

“The pipa is very unique,” Lin said. “It can be very loud and very gentle as well. It can make chords and individual melodies. It can almost accompany itself.” No wonder it is regarded as the king of Chinese folk instruments.

Another unique feature of the Shen Yun Orchestra is that since the group plays with the intent to revive traditional Chinese culture, it produces a different kind of energy that the audience can feel.

“A lot of our audiences, they don’t know why, but they just feel touched. Some even have tears in their eyes,” Lin said. “When musicians give their whole heart to feel the music, that energy force is very, very strong,” she said.