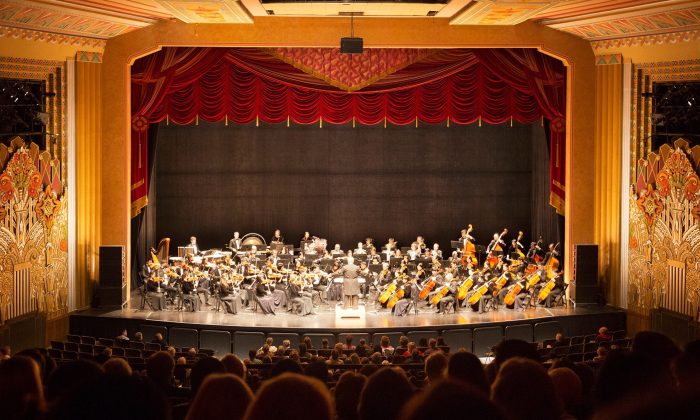 BURLINGTON, Vt.—Museum director Matt Powers deals with history on a regular basis at the Woodstock History Center in Vermont, preserving and presenting the stories of the historical city of Woodstock.

It is a daily interest for his son Finn as well, who stares up at the pictures of China on his wall each night as he goes to bed as he listens to Chinese music—CDs he received as a Christmas present.

So as a joyful birthday outing for Mr. Powers, he, his wife Bethany, and sons Finn and Seamus went to the Flynn Center for the Performing Arts, where ancient, traditional Chinese instruments like the two-stringed erhu took center stage with Shen Yun Symphony Orchestra.

The orchestra, comprised of members from the various Shen Yun Performing Arts companies that tour the world annually, shares the Shen Yun mission of reviving traditional Chinese culture. What makes the orchestra is unique is that it harmonizes a full Western symphony with traditional Chinese instruments, playing both Chinese melodies and Western classics like Tchaikovsky.

Finn loves Chinese culture and lore, Mrs. Powers said, and many ancient stories were brought to life through the music.

“Being in Vermont we’re not near a metropolis, so this was a good way to get him exposed to it,” Mrs. Powers said. The family was full of laughs and energy, as she recounted the experience. The parents said they read from the program to the children as the concert progressed.

Three pieces in, the orchestra played “Capturing Arrows with Boats of Straw,” which depicts a well-loved episode from the classic novel “Romance of the Three Kingdoms,” according to the program. The legendary strategist Zhuge Liang is up against forces ten times his own, and must produce 100,000 arrows quickly. Strong rhythms, battle-horns, and thunderous drums tell his story as he outwits the other side into shooting hordes of arrows at boats of straw men.

“He turned to me and said ‘that was my favorite!'” Mrs. Powers said of her younger son Seamus. “Of course, that was only the third one.”

“It was lovely. It was lovely to sit and close my eyes and hear all the different instruments,” Mrs. Powers said.

A Glimpse Into Ancient China

Zhuge Liang’s tale was a favorite for audience member Louise Parks as well.

A long-time lover of traditional Chinese culture, Ms. Parks has sought out the country’s past through the arts. It was in her upbringing to go to the symphony, travel, and try cuisine of other cultures, and seeing Shen Yun Symphony Orchestra was a given for her.

“Today’s performance is fantastic, it’s beyond my dream,” Ms. Parks said. “It gives me the sense of the really traditional Chinese culture, as opposed to some of the things that I actually saw in China when I was there.”

Traditional Chinese culture has all but been destroyed under years of communist rule. Today, many of the arts have been brought back in form, but not in spirit.

As Shen Yun explains on its website, Chinese culture is believed to be divinely inspired, and the principles found in Buddhism and Taoism are at the heart of everything from calligraphy to music to medicine. In systemic campaigns such as the Cultural Revolution, the Chinese Communist Party has sought to uproot these traditional beliefs.

Then in 2006, a group of artists from around the world started Shen Yun in New York with the mission of reviving traditional Chinese culture through the universal languages of music and dance. Shen Yun has performed in over a hundred cities worldwide, and the orchestra is now in its fourth year of touring.

Bernadette Clarke heard the sound of Shen Yun through a small radio while at a farmer’s market in New York.

“I was taken with the sound,” Ms. Clarke said. She received a program and showed her husband Carmine Salvl and her friend John Yonkovic, and the three became fascinated with the harmonization of East and West.

“I was captivated,” Father Yonkovic, a Catholic priest, said of the melodies, noting they were at once hauntingly historical, and at the same time very present day.

“It is spiritual,” Ms. Clarke said.

On Oct. 11, Shen Yun Symphony Orchestra will give one performance at The Kennedy Center Concert Hall, Washington.